Will China rise stronger from the pandemic? A flow of media reports and op-eds have recently flourished, forecasting the decline of the West and the triumph of China on the world stage amid the COVID-19 pandemic. Some have declared the dawn of a “post-Western world”. 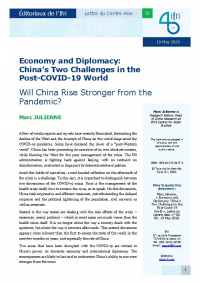 China has been promoting its narrative of its own absolute success, while blaming the West for the poor management of the crisis. The US administration is fighting back against Beijing, with no restraint on disinformation, motivated in large part by domestic electoral politics.

Amid this battle of narratives, a cool-headed reflection on the aftermath of the crisis is a challenge. To this aim, it is important to distinguish between two dimensions of the COVID-19 crisis. First is the management of the health crisis itself; how to contain the virus, so to speak. On this dimension, China took impressive and efficient measures, notwithstanding the delayed response and the political tightening of the population, civil servants as well as scientists.

Second is the way states are dealing with the side effects of the crisis – economic, social, political – which in most cases are much worse than the health crisis itself. It is no longer about the way a country deals with the epidemic, but about the way it recovers afterwards. This second dimension appears more relevant than the first to assess the state of the world in the next few months or years, and especially the role of China.

Two areas that have been disrupted with the COVID-19 are critical to China’s power: its domestic economy and international diplomacy. The consequences are likely to last and to undermine China’s ability to rise even stronger from the crisis.

In an already difficult and slowing economic context, the Covid-19 crisis has hit China with four successive waves. The first wave was the lockdown that brought the Chinese economy to a standstill. This has resulted in a first-quarter GDP loss of 6.8% compared to the first quarter of 2019.

The second wave, after the end of the lockdown and the restarting of the economy, is the drop in domestic demand — people being reluctant to spend money on leisure activities.

The world demand has also dropped, which is the third wave. With Europe, North America and other parts of the world under lockdown, the demand for China’s products is down for a few months at least, preventing China from recovering its full production and export capacity.

The fourth wave, although still hypothetical, is the much-discussed reconfiguration of global value chains. Foreign industries that have relied too much on China’s market and supply chains seem to be reconsidering their strategies. It could result in the relocation of investments and factories from China to other countries in Southeast Asia, North Africa or Europe. Witnessing the severe loss of autonomy in health supplies in Europe, the health industry is likely to be the first sector to relocate production lines.

Employment and consumption seem especially concerning for the recovery of the Chinese economy. According to the National Bureau of statistics, China’s (urban) unemployment rate[1] was 6.2% in February 2020, and 5.9% in March. In 2019, it was fluctuating between 5 and 5.3%. However, this rate does not include the huge amount of migrant workers who lost their jobs and returned to the countryside. A report[2] by the Chinese consulting firm, Zhongtai Securities, released on April 24, assessed that the unemployment rate would actually be 20.5% (around 70 million people), including migrant workers. The report was removed from the firm’s website the next day, and the author and director of the institute, Li Xunlei, was downgraded[3] to chief economist.

The drop in domestic demand and the relocation of foreign industries could further affect employment in China in the medium term. As Li Xunlei put[4] it: “Many problems such as reduced income, bankruptcy, and increased unemployment during periods of economic weakness have multiplier effects.” A record number of 8.74 million graduates students about to enter the Chinese job market in 2020, in addition to the 300.000 students from overseas and unemployed graduates from the year before have also raised[5] concern.

Consumption is a structural challenge in China where the average household income is quite low and the saving rate one of the highest in the world (45% of GDP). Unemployment and uncertainty about the future triggered by Covid-19 have worsened the low consumption rate, which was expected to be an engine for economic recovery. Local authorities have even issued[6] billions of Yuan in shopping vouchers to boost consumption, but people tend to use them for daily necessities.

Other sectors involve serious medium term risks, like real estate and banking system, and Chinese central bank has little leverage to provide a substantial financial boost into the economy (contrary to the SRAS in 2004 and the financial crisis in 2008). In this regard, the COVID-19 economic shock has worsened the structural difficulties that Beijing was already struggling to deal with, and this could turn out to have lasting consequences social stability.

Although the People’s Republic of China (PRC) is one of the biggest players on the international stage, it does not constitute a diplomatic center of gravity. It has no strategic allies (aside from the North Korea), only economic partners and partners of circumstance (so-called “like-minded countries”). The question remains whether the economic influence China has on every continent is enough to make it a world leader. It seems, on the contrary, that China’s much-awaited soft power has not materialized and that Beijing’s trust capital worldwide is actually very low.

The COVID-19 pandemic appears to have exacerbated this trust deficit, mainly because of three factors. First is the full-on “wolf warrior” diplomacy Beijing has displayed. Many Chinese diplomats around the world have been demonstrating an uninhibited aggressive attitude. Although China keeps presenting itself as a responsible and reliable stakeholder providing health supplies to many countries in need amid the COVID-19 pandemic, it missed opportunities to actually prove its commitment to multilateralism.

On May 4th, the Coronavirus Global Response Summit took place under the leadership of the President of the European Commission, Ursula van der Leyen. More than 50 heads of state, government and international organization, as well as state ministers took part in the virtual event aimed at raising funds for research on a COVID-19 vaccine. Instead of Premier Li Keqiang, who was supposed to attend, China sent its ambassador to the EU, Zhang Ming, the lowest-level[7] official in the meeting. He did not make any financial pledge to the Coronavirus Global Response, but he emphasized China already made its own efforts to fight the virus, such as a RMB 2 billion (€260 million) government fund, RMB 1 billion (€130 million) investments in national research, as well as $50 million donation to the World Health Organization (WHO). In comparison, Germany has pledged[8] €525 million, while France committed to €500 million in addition to the €1.2 billion provided[9] by the Agence Française de Développement to the “COVID-19 – Health in Common” initiative. Considering that neither the US nor Russia took part in the meeting, China could have seized the opportunity to demonstrate its engagement to international cooperation in the fight against the virus.

The second factor is the doubts and mistrust that have risen worldwide about the information China has delivered – or not – regarding the management of the crisis. Despite Beijing’s tireless efforts to impose its own narrative, its transparency has been questioned on issues such as the number of cases and deaths, the origin of the virus, or influence over the WHO. Even state leaders and government officials have raised such concerns, in France, Germany, the UK, Sweden[10], and within the EU institutions, as well as in Australia[11], and even Iran[12], China’s close partner. Australia and the EU have also pushed for an independent inquiry into the coronavirus outbreak, ahead of the World Health Assembly. On May 18, more than 120 countries, roughly two third of WHO’s member states, had supported the motion[13], including Russia, India, Turkey, and Indonesia.

This is not to mention the United States, because the battle of narratives and disinformation between Washington and Beijing is now unrestrained on both sides. In the midst of these enflamed narratives, Chinese ambassador to the US, Cui Tiankai, has been noticeable for his moderation.

The third factor relates to Chinese diplomats’ poor management of public relations crisis. In Africa, they found themselves under fire after a surge of racist actions against African people in Guangzhou in mid-April. Chinese ambassadors to Nigeria, Kenya, Uganda, Ghana and the African Union were all summoned by their hosts. In Nigeria, several Representatives presented a motion[14] before the House on the “Maltreatment & Institutional Racial Discrimination Against Nigerian in China”, which also intends to regulate more strictly the status of Chinese citizens in the country.

Overall, China’s diplomacy amid the pandemic has been unsuccessful at best, or very counter-productive at worst, degrading China’s image abroad. This observation is also shared among Chinese experts[15]. Even the China Institutes of Contemporary International relations (CICIR), a high-profile think tank under the supervision of the Ministry of State Security, is said to have recently produced an internal report to the government assessing[16] that “global anti-China sentiment is at its highest since the 1989 Tiananmen Square crackdown”.

Far from the dazzling success of the China model Beijing is trying to sell worldwide, sometimes aggressively, economic difficulties at home may show another side of the coin. This is indeed a source of concern for Europe, because a weakened China is not something the global economy would wish for. Beijing may also have gained too much confidence too soon on the international stage, and the resulting distrust may undermine China’s rise as a global leader. We don’t know what the post-COVID-19 world will be like, but considering its ability and will, there is nothing less certain than the advent of a China-led world.

[1]. National Bureau of Statistics of China, see at: http://data.stats.gov.cn.

[11]. P. Williams, “Politicians Are Demanding Answers from China about Coronavirus. Some Want to Take Things even Further”, ABC, 17 April 2020, available at www.abc.net.au

Facing a Wall: Climate in the German Elections and...

After the Hydrogen Bubble Bursts: The Factors Shaping and...

Geopolitics of the World’s Forests: Strategies for Tackling...
END_OF_DOCUMENT_TOKEN_TO_BE_REPLACED
Climate, Trade and Industrial Policy: What Strategy for the European Union? Les Jeudis de...

Carole MATHIEU
The Aftermath of the 2021 German Federal Election - Analysis of the Results and...

On September 26, 2021, German Federal Elections will be held, and mark the end of the Merkel...

How Strong is the Taiwan-US-Japan Triangle?...

The United States is the linchpin of Taiwan’s security. Under Donald Trump’s presidency, as...