When politics catches up to the economy. In the wake of the EU-China summit, what can we expect from the bilateral relations? 2020 was supposed to be the year of EU-China relations. However, the Covid-19 pandemic has quickly disrupted the positive expectations. 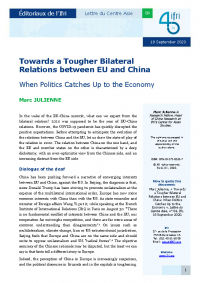 Dialogue of the deaf

China has been pushing forward a narrative of converging interests between EU and China, against the US. In Beijing, the diagnosis is that, since Donald Trump has been striving to promote unilateralism at the expense of the multilateral international order, Europe has now more common interests with China than with the US. As state councilor and minister of Foreign affairs Wang Yi put it, while speaking at the French Institute of International Relations (Ifri) in Paris on August 30: “There is no fundamental conflict of interests between China and the EU; our cooperation far outweighs competition, and there are far more areas of common understanding than disagreements”. On issues such as multilateralism, climate change, Iran or US extraterritorial jurisdiction, Beijing feels that Europe and China are on the same side and should unite to oppose unilateralism and US “radical forces”. The objective accuracy of the Chinese rationale may be disputed, but the least we can say is that facts tell a different story in Europe.

Indeed, the perception of China in Europe is increasingly suspicious, and the political discourse in Brussels and in the capitals is toughening. The reasons for that are the long-standing fatigue with regard to market restriction towards European businesses in China and predatory investment practices in Europe. In addition to these economy-centered issues, the year 2020 has raised major political concerns. Firstly, the lack of transparency during the Covid-19 crisis and then the aggressive attitude of the Chinese diplomats (labeled “wolf warriors”) towards European countries (especially in France, Sweden, Germany) has cooled down the governments’, Parliaments’ and public opinions’ perception of China in Europe. Secondly, the imposition of the PRC National security law in Hong Kong on June 30 was perceived in many countries as a violation of Hong Kong domestic legislation as well as of the 1984 Sino-British Joint Declaration on the status of Hong Kong. The shared feeling in Europe, which was repeatedly stated by the European External Action Service (EEAS), is that the law seriously undermines the “one country two systems” principle. Thirdly, new revelations on the repression of Uyghurs in Xinjiang has increased public outcry in Europe. And a fourth separate although important issue within the relationship currently is, indeed, the 5G. No European country has explicitly barred Chinese 5G infrastructure providers (Huawei essentially) from its market so far, but the trend appears to favor European providers (Nokia and Ericsson). Chinese officials have, here again, threatened of reprisals any government who would forbid Huawei’s market access.

The three main concerns – the aggressive attitude of Chinese diplomats, the suppression of pro-democracy movement in Hong Kong, and of the Uyghurs in Xinjiang – are becoming unavoidable topics for EU institutions and member states’ governments because they directly contradict European core values. Indeed, during their official visits to Europe in late August and early September, Foreign Minister Wang Yi (Italy, Netherlands, Norway, France, Germany), and CPC’s top diplomat Yang Jiechi (Spain and Greece) both received a rather cold welcome. Many high-level government officials have voiced their concerns and opposition to Chinese policies regarding human rights. Beijing, for its part, considers Hong Kong and Xinjiang – as well as Taiwan – as internal affairs and refuses any dialogue with other countries on these topics.

EU chief diplomat, Josep Borrell, is also increasingly voicing EU’s concerns on the official level and in the European public debate. He gave interviews and published multiple op-eds in renowned newspapers in Europe and beyond, as well as in think tanks. He notably assessed that the EU has been too “naïve" with regard to China, and he advocated that trust, transparency and reciprocity to be the “watchwords for EU-China”, thus pointing out the lack thereof. More broadly, in the middle of the US-China competition, Borrell has called Europe to follow its own way (the so-called “Sinatra doctrine”, based on the song “My way”). He also repeatedly called to “relearn the language of power and conceive of Europe as a top-tier geostrategic actor”.

So the situation in Europe now is that economic interests can no longer overshadow political and geopolitical ones. This trend seems to go against China’s will to keep political issues out of the relationship. As the Chinese ambassador to the EU, Zhang Ming, has recently written: “It is now imperative to guard against any attempt to look at China-EU cooperation through the lens of geopolitics or ideology.”

This dichotomy between European and Chinese views is quite obvious, with Wang Yi calling the two “comprehensive strategic partners”, while the European Commission identified China as a “systemic rival” in March 2019. Likewise, Zhang Ming’s confidence “that the two sides can consolidate strategic trust and take [their] mutually beneficial cooperation forward continuously”, sounds more like a diplomatic wishful thinking than an objective assessment of the current situation.

Why does Beijing sound so positive about its potential of cooperation with Europe, while Brussels is showing quite the opposite? It is because Europe is a crucial partner of China for two reasons, one economical, and the other political. Economically, the EU is China’s first trading partner (while EU’s first partner is the US). With a slowing GDP growth and a low domestic consumption in China, the 500 million-strong European population with high average income is a decisive outlet for Chinese exports. Politically, China’s relations to the EU must be comprehended within the broader context of the US-China rivalry. The trade war Washington has been waging against China since 2018 has mutated into a full on technological and ideological conflict. Europe happens to be the main battlefield for influence between the two great powers. Since the EU is not a monolith with only one single foreign policy, China tries to strengthen its position vis-à-vis the US by gaining influence in Europe.

In this context, the EU-China summit virtually held between European leaders (the head of the Commission Ursula van der Leyen, the President of the European Council Charles Michel and the rotating President of the Council, German Chancellor Angela Merkel) and Chinese President Xi Jinping was a stepping-stone for the relationship in 2020. At the initiative of Germany, the summit was initially planned to be the first ever summit gathering EU, member states and China’s leaders at the same time. Due to health issues it was eventually held in a limited and virtual format.

The outcomes of the summit reflect the above-mentioned dichotomy. Four major topics were addressed during the summit: climate change, economic and trade issues, international affairs and human rights, as well as the Covid-19 and economic recovery. The Chinese side called to “enhance mutual trust, seek mutual benefits on a win-win basis and uphold multilateralism, vowing to bring the ties up to a higher level.” Xi Jinping highlighted four important principles for the relationship: peaceful coexistence, openness and cooperation, multilateralism, as well as dialogue and consultation.

European leaders, for their part, have clearly stated their expectation for more reciprocity and fairness, and a more balanced relationship. As Charles Michel explained: “Europe is a player, not a playing field”. The agreement on geographical indications was signed but no clear commitments were made on the much-expected investment treaty. “China has to convince us that it is worth having an investment agreement", said Ursula van der Leyen.

For Beijing it may have been the last chance to promote the narrative of convergence of interests and convince Europeans that they have more to gain in cooperating with China than with the US. Indeed, Beijing’s strategy towards the EU may evolve very soon, seven weeks before the US presidential election. If Joe Biden is elected, the Chinese narrative that has prevailed so far will become outdated. All signals indicate that Biden would – to a certain extent – revive transatlantic relations and reengage in the UN institutions, while at the same time maintain a tough policy towards China. As a result, China could no longer use the argument of the US unilateralism to attract Europe, and it would have to build a new strategy and narrative. This is, of course, not to rule out the likelihood of the reelection of Donald Trump, which in this case would allow China to keep on with the same narrative.

Whoever is elected in America, the EU-China relations are mutating into a more complex balance. Until 2020, economic relations and the negotiation of the investment treaty were the main stumbling block. Tomorrow, political matters such as the conception of multilateralism, globalization, as well as universalism of human rights, may become the central dissent between the two.

A decisive question for Europe prevails now: is the EU’s and member states’ foreign policy only determined by the US and China, or do they elaborate their own policy based on their own interests? What is for sure is that the research for strategic autonomy and the willingness to build a geopolitical Europe keep gaining momentum in Brussels and in European capitals. Actually, the US unilateralism was one of the major drivers for this quest. China’s assertiveness seems now to become the new main driver of EU’s consensus to defend its interests and values.

This article was originally published at valdaiclub.com.

Neither surveillance nor algorithmic consumerism. Towards...
END_OF_DOCUMENT_TOKEN_TO_BE_REPLACED
Citizen Mobilization: A Solution for Refugee Integration in Europe?