While Tokyo prepares to welcome the 2020 Summer Olympic Games, the likelihood that a massive earthquake will occur in the capital city within the next thirty years is estimated at 70 %. This fact alone reflects the challenges that Japan must face in managing the risk of natural disasters. 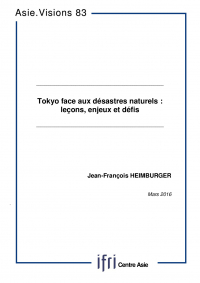 The economic heart of Japan with a population of 13.5 million, Tokyo is particularly vulnerable to violent earthquakes and storms. In order to prevent these natural risks from turning into disasters, Japan relies on lessons learned from past disasters, and in particular past failures, in order to improve its risk prevention and management systems.

Following earthquakes in 1923 in Tokyo, 1995 in Kobe and 2011 in the Tohoku, weaknesses were found at various levels: insufficiently resistant infrastructure, ineffective rescue services, inadequate public information and weak social ties.

The country, and collectivities such as Tokyo, bounced back by strengthening their legal arsenals and increasing budgets for disaster prevention. Monitoring and forecasting systems have been improved and buildings strengthened. Rescue services have been upgraded and public information has been intensified. Consequently, Japan is now internationally recognized as a model in terms of prevention and disaster response capacities.

Nonetheless, in the short and medium terms, authorities in Tokyo and elsewhere in Japan must still overcome a number of challenges. A first set relates to infrastructure: the proportion of vulnerable buildings needs to be decreased and fail safes to cut electricity generalized in order to avoid widespread fires following major earthquakes. Additionally, escape plans and public awareness systems need to be improved, which would reduce the number of potential victims in case of flood. A comprehensive approach is also essential, one that integrates more vulnerable populations such as seniors or disabled persons (who respectively account for 22 % and 4.5 % of Tokyo’s population), but also foreign residents, tourists and the homeless. Furthermore, some dangers (high winds, volcanic eruptions, and heat waves) are not always addressed because of their low likelihood or a lack of appropriate means, whereas their impact on society could be significant. Finally, in view of problems observed during the reconstruction phase after the earthquakes in 1995 and 2011 (precarious living conditions, case of solitary deaths), it is necessary to better anticipate post-disaster challenges in order to limit secondary victims.

The scale of future disasters will in part depend on the anticipation of authorities as well as citizens and on their ability to pursue and intensify their preparation efforts before disaster strikes.

Read the text in French

COVID-19 and the End of Technological Innocence

The green recovery, Germany's energy transition and the coordination of French and German...

Ahead of Germany's EU Council presidency and amidst debates over the EU recovery plan and 2021...