The Impact of the Development of Shale Gas in the United States on Europa's Petrochemical Industries Notes de l'Ifri, November 2013

The shale gas revolution has led to strong falls in energy prices, reducing significantly the raw material costs of the US petrochemical industry. Between 2008 and 2012, US gas prices fell by two thirds. 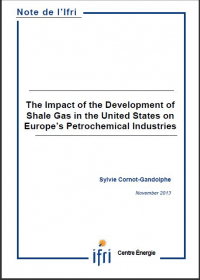 Ethane comes from natural gas liquids (NGLs) contained in shale gas, and used by the US petrochemical industry as the raw material to make ethylene. Its price fell by 55% between 2008 and 2012. These price cuts are giving the US petrochemical industry a significant competitive advantage, and profits are exploding. The United States has become the region in the world with the second lowest energy and raw material prices, just after the Middle East.

This renewed competitiveness is leading to the re-birth of American petrochemicals, whereas the sector was stagnating and even experiencing waves of closures in the middle of the 2000s. An estimated $15 billion is set to be invested in the sector by 2017, generating a 40% increase in ethylene output, the leading petrochemical product. The competitive advantage makes itself felt downstream in the sector. In particular, plastics derived from the transformation of petrochemicals are used in manufacturing in three major consumer industries: packaging, construction and the automotive industry. By 2017, the output capacity of polyethylene, the polymer most used in the production of plastics, should rise by 40%. The economic spillovers of such investments are significant. The American Chemistry Council (ACC) has conducted a study of around one hundred investment projects, identified at the end of March 2013 in the US chemical industry (excluding pharmaceuticals). These projects involved $72 billion in investment, through to 2020. They will raise the turnover of the chemical industry by $67 billion (in 2012 dollars), by 2020, and will create 1.2 million jobs during the phase of construction. By 2020, additional earnings of the US economy will run to $201 billion, with tax revenues of $14 billion. The ACC estimates that these investments will lead to the United States to become a net exporter of chemicals, thus eliminating the trade deficit due to rising pharmaceutical imports.

In contrast, the European petrochemicals industry is in a delicate position. It is in the grip of sluggish demand in Europe, rising energy costs, ageing plants and production over-capacity. Unlike the US, Europe’s petrochemical producers use naphtha from refined oil as a raw material. Between 2008 and 2012, the price of naphtha rose by 19%, and margins for European producers have been falling, as they can only pass on costs partially to their clients, given the competition of mega petrochemical plants built in the Middle East in the 2000s, and that to come from the United States.

In time, European petrochemical producers will face a wave of competition from products Made in America, expected to hit international markets in 2016-17: i.e. the time needed by US producers to complete their investments. This competition will be new: American products will be in direct competition with hi-tech chemicals in which Europe is currently a leader. Europe does not benefit from low energy prices and will lose out in cost competition. It will have trouble resisting US imports that will not be subsidised, but which will simply benefit from the competitive advantage of having low gas prices. European exports also risk facing US competition elsewhere, as American producers will seek to get into high-growth markets too.

Europe’s petrochemicals sector thus faces necessary restructuring and rationalization of its production plants. American competition is accelerating the closure of petrochemical sites and the redirection of European petrochemicals towards niche products. To maintain competitiveness, European companies are closing isolated and loss-making sites, and they are integrating production up- and downstream, in order to benefit from synergies and cut costs. They are diversifying their use of raw materials and replacing naphtha. Downstream production is being redirected towards products in which European demand is growing strongly: innovative products, with high value-added and hi-technology, which are European strong points. The redirection is also shifting to products whose costs are less dependent on energy and raw material prices, which is the weak point of Europe’s industry, as its energy costs are three times as high as US costs. These products are also more environmentally friendly, meeting the imperatives of sustainable development. This is another strength of Europe’s petrochemical industry, which is leading in research in biochemistry and bio-plastics. Lastly, just as they are investing in high-growth regions (in Asia and especially China), and in low energy cost regions (the Middle East), so too Europe’s major industrial groups are investing in the United States, in order to benefit from the shale gas bonanza and cheaper production.

The Impact of the Development of Shale Gas in the United States on Europa's Petrochemical Industries
Download
1.49 Mo
Keywords
Petrochemical industry Shale gas European Union United States
Print this article
Back to top

Europe in the Face of US-China Rivalry
END_OF_DOCUMENT_TOKEN_TO_BE_REPLACED
Spain, the Green Deal and the energy transition Closed door energy breakfast...