Water scarcity in the Gulf Cooperation Council (GCC) states has traditionally been addressed by finding new ways of producing water. The high costs of desalinated water production are borne by the State through subsidies. As this trend is not environmentally or economically sustainable, new strategies are now giving priority to cost recovery and efficient resource management. 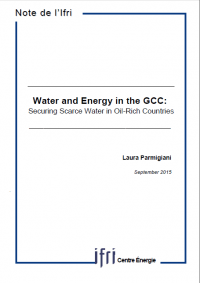 This comparative study will show that in the GCC countries, whose oil or gas reserves are among the largest worldwide, the management of water and energy resources has been relying upon vertically integrated government agencies and companies, with water supply policies fuelled by cheap energy. Wealth redistribution coming from oil and gas revenues has been ensured through low or inexistent water and electricity tariffs.

Groundwater resources, which are the only water sources of the region (there are no surface waters available, except for few dams in Saudi Arabia), are quickly diminishing. Desalination has been developing very fast and now seems to be the only reliable form of supplying water for future requirements. Saudi Arabia alone might need 18 billion cubic meter (bcm) of fresh water per year by 2050 to sustain current consumption patterns. For this reason, huge amounts of energy will be required and the question of the right energy/water balance is at stake. Technological choices in the electricity sector will influence the way water is produced in the future, and vice versa. In particular, water production fuelled by gas or heavy fuel can be linked to power generation, enhancing efficiency but lowering flexibility. Membrane technologies, which require only electricity inputs, allow for a diversified energy and electricity mix but they have smaller critical sizes and therefore produce smaller desalinated water outputs. An overall transformation map will have to be drafted in each country to show the development plans of both electricity generation and water production. This would enable governments and their agencies to assess cross-sector spill-over effects in a timely manner.

The single buyer model has ensured stability and predictability of the water and electricity system and enabled policy makers to forecast precisely water and electricity demand. However, the assumption of simply adding new water or electricity capacity is no longer coherent since cheap, domestic fuel is not as abundantly available as it was in the 1980s. The United Arab Emirates (UAE), Saudi Arabia and Kuwait are already short of natural gas.

New plans have therefore been drafted to fit into an overall strategy of process optimization and reflecting costs, in view of minimizing the impact on the wealth redistribution policy, while starting to raise awareness about the outmost importance of water for the future of the GCC population. If rising tariffs seem the most obvious action to take, other ambitious political decisions have to be addressed, such as the creation of a water law and an inter-GCC water pricing framework.