After a decade characterised by the take-off of renewable energies, Germany decided in 2010 to make them the top priority. At the same time, it decided to make exemplary efforts in terms of energy efficiency and the reduction of greenhouse gases. The audacious nature of this policy was strengthened by the “turn” taken in 2011 to give up nuclear energy in the wake of the Fukushima accident. 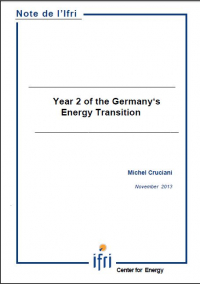 Given the initial results for 2012, Germany seems to be on target for reaching its national objective, of 18% renewable energy within total consumption by 2020. Germany is also well placed to reduce its planned cut in electricity consumption of 10%. The country will also meet its commitments, both international and European, concerning greenhouse gas emissions. In contrast, recent trends suggest it will be increasingly difficult for Germany to meet its own, domestic goal of cutting emissions by 40%, by 2020. Furthermore, it is hard to see how Germany will be able to bring down total energy consumption by 20% by 2020 (from 2008 levels), or increase the share of renewables in electricity production above 35%.

Success with this latter objective is largely dependent on reinforcing networks, both for transmission over long distances and for local distribution. It is not sure that the delays accumulated in both areas will be made up for by 2020, despite the rapid legislative adjustments that have already been made. By favouring intermittent energy sources - wind and solar power - Germany also faces problems of managing frequent production fluctuations. The long term solution to this lies in storing electricity. However, despite the considerable efforts in research and development, the technologies necessary for this will doubtless not be available on a large scale before the end of the present decade. These efforts could nevertheless provide German industry with interesting advantages in sectors of high potential, such as electric vehicles.

Measures to promote renewable energies are also costly, and constitute another threat slowing down their development. Until now, this cost has been born by household consumers and small firms, with large industries being sheltered from such costs. Yet these rising costs are being increasingly criticised. Changes are likely of follow in the wake of the national elections which took place on the 22 September 2013, and their impact on the future pace of renewable electricity production remains unknown. Yet so far the sector has a positive image due to the jobs it creates. The latter are going to depend more and more on foreign outlets, though the misadventures of photovoltaic solar energy indicate the uncertainties hanging over the sector. Renewable energies however do have a major advantage in that they have been able to set up financial sources that are both solid and not very costly.

Such financing facilities do not seem to be available to most European countries. This illustrates a specific characteristic of German renewables, namely that their development in Germany also depends on the reaction of other European states. The latter are affected physically by the massive arrival of electricity from wind and solar power being produced in Germany, and economically by the disruptions this leads to in wholesale markets. So far, the response of other countries has been poorly coordinated by the European Commission which seems to have been caught on the wrong foot by the implementation of capacity mechanisms, in some countries, or by the demands to reconstruct the market model.