Skip to main content
You are here
Home > The US Shale Oil Revolution: The Test of the Business Model is Underway
Publications Policy Papers
Sylvie CORNOT-GANDOLPHE

The US Shale Oil Revolution: The Test of the Business Model is Underway

Since 2010, the United States has been undergoing a second shale revolution with the very rapid development of Light Tight Oil (LTO) or shale oil, following the revolution in shale gas. This development has allowed the production of oil and liquids to increase, so that the US is the world’s largest producer today, ahead of Saudi Arabia and Russia. 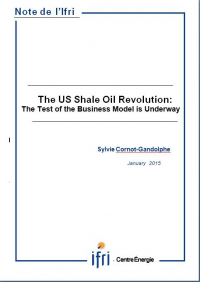 The production of LTO accounts for 55% of US crude oil output now, and has enabled the country to reduce its oil imports and expand its exports of oil products. This has important ramifications for the world oil market, traded oil flows and more recently the oil price.

As with shale gas, this oil production has a key impact on the US economy, especially on its trade balance, but also its security of supplies. It has allowed the country to cut its dependence on oil imports, which fell from 60% of consumption in 2005 to 27% in 2014. The significant industrial consequences for the US refining sector of this development also need to be noted, as it now has important margins, thanks to the price differential between Brent and WTI.

The fall in the price of oil, by 50% for the WTI between June 2014 and the beginning of January 2015, raises significant uncertainties concerning the ability of American producers to pursue further investments needed to sustain the shale oil revolution. As operating costs (OPEX) to produce LTO are limited, production at existing wells is not really called into question. But, LTO output is characterized by very rapid declines in initial production per well (between 60% and 90% in the first year). Therefore, sustained investment in new wells is necessary to maintain and/or increase output. Such rapid output decline means that projects are very strongly dependent on the price of oil in their first year of operation. This contrasts with conventional oil production whose economics spans much longer time periods. Accordingly, there are fears that lower oil prices will lead to cuts in investment in shale oil and hence a fall in production.

Breakeven prices provide information about the minimum prices needed for drilling projects to be profitable. Yet their analysis needs to be qualified. The cost of producing LTO is a determining factor, but it is practically specific to each individual well, given the greatly diverging geological properties of each formation, and even within a same play between “sweet spots” and wells at the periphery. It seems that the three main formations currently being exploited (Eagle Ford, Bakken and the Permian basin), which account for the majority of current output, have sweet spots for which the breakeven price is relatively low. This is reinforced if land acquisition costs and infrastructural costs are taken as stranded (so-called “mid-cycle” costs”). It therefore seems likely that drilling activities will move towards the sweet spots in these basins, and this has been confirmed by announcements made by operators, as well as the distribution of the fall in drilling activity by shale plays/states, observed since December 2014...

Europe in the Face of US-China Rivalry
END_OF_DOCUMENT_TOKEN_TO_BE_REPLACED
Spain, the Green Deal and the energy transition Closed door energy breakfast...