Agriculture is an area of strategic importance, where relations between the United States and the European Union (EU) vary from solidarity to competition. 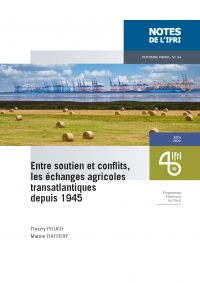 In the immediate postwar period, the United States assisted the Europeans by exporting crucial alimentary goods. Through the creation of a common market and the development of the Common Agricultural Policy (CAP), implementing mechanisms that could be seen as protectionists, the EU’s dependence on the United States has reduced over time. With the Dillon Round of negotiations, however, the United States imposed substantial soy imports (soy grains and soybean cake) that would feed European livestock.

Since the 1970s, the EU has become a leader in agricultural exports, surpassing the United States. Through the different negotiation rounds within the "General Agreement on Tariffs and Trade" (GATT), now the "World Trade Organization" (WTO), the two stakeholders have viciously competed over the use of subsidies. The 1994 Marrakesh Agreement brought about a temporary peace.

In 2013, the parties engaged in large negotiations for a Transatlantic Trade and Investment Partnership (TTIP, also called TAFTA). On the American side, parallel negotiations took place for a similar agreement in the Pacific, called Trans-Pacific Partnership (TPP). Disagreements over protected geographical indications (PGI) and the public’s distrust towards investor-state dispute settlement (ISDS) mechanisms prevented any progress on the TTIP. The arrival of a populist Donald Trump in the White House halted negotiations, without any hope of resuming talks under his Democrat successor, Joe Biden.

An imbalance remains: during the 2017-2019 tariff war between China and the Trump administration, the Europeans boosted the American soy market by doubling their imports. Simultaneously, however, the United States took measures against the EU, first in response to alleged subsidies on Spanish olives, then imposing substantial taxes on European wines in the context of the Boeing-Airbus dispute. Today, the US Secretary of Agriculture, Tom Vilsack, criticizes the European Green Deal and defends its exact opposite: a strategy of “sustainable productivity growth,” coupled with the continuing use of corn-based ethanol.

Could the situation improve? Building a western bloc to counter the risks of a global food crisis following Russian actions and the war in Ukraine would certainly help.