In January 2017, U.S. intelligence agencies confirmed that Russia had indeed attempted to interfere with the 2016 U.S. election campaign. This effort took two forms: on the one hand, beginning in the Summer of 2016, the hacking and publication of the Democratic National Committee (DNC) emails, in order to hurt the Democratic candidacy; and on the other hand, an aggressive communication campaign aimed at disrupting the electoral process in favor of Donald Trump. 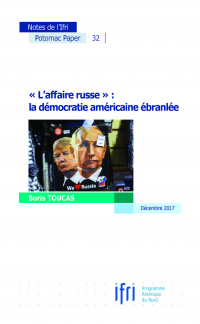 This second move was visible since 2014 through the attempt to overwhelm social media (bots, ads, etc.) with false or partisan information, fanning the flames of an already-tense election context.

Links between the Trump campaign and the Russian interference effort have not been established so far. The possibility of collusion is explored by several Congressional investigations as well as by Special Counsel Robert Mueller. While charges against several former advisors of President Trump have been laid, the possible grounds for prosecution are many: lobbying contracts, contacts with Russian officials, and obstruction of justice, among others.

Russia’s interference effort was reinforced by the Republican Party’s very similar communication campaign during the election, as well as by a favorable media environment. Indeed, not only social networks and “critical” media such as WikiLeaks, but also the struggling traditional media relayed and amplified information that weakened institutions and increased doubts for the American public.

The Russian interference of 2016 highlighted the dysfunctionality of the U.S. democracy, which was the Kremlin’s main objective. This undermined American citizen’s confidence in their institutions and could yet lead to the destitution of President Trump. It also drew particular attention to the role and political responsibility of the major internet actors in the digital manipulation attempts.

Finally, the situation reconfigures Russian-American relations. In contrast to past decades, the Democratic Party is now very hostile to Putin’s Russia. Meanwhile, the Republican Party retains its traditional mistrust of Moscow. Having become once again an enemy of the American democracy, Russia may have lost all its channels of influence in the United States.

Naval Combat Redux: A Renewed Challenge for Western Navies
END_OF_DOCUMENT_TOKEN_TO_BE_REPLACED
Is the UN Security Council still relevant? France and Japan's views on the future of...