Although not akin to the protectionist policies practiced by the United States through the 1930s, the trade war launched by the Trump administration since early 2018 challenges the principles and institutions of free trade. 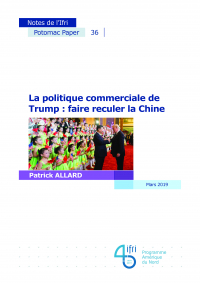 The taxes and barriers currently put in place correspond to certain exceptional legal provisions in the General Agreement on Tariffs and Trade (GATT) and the World Trade Organization (WTO) texts and rely on US trade laws predating the WTO. Trump’s trade policy enjoys a level of bipartisan consensus in the country today, centered around the idea of improving the conditions of trade with partners while hampering the growing power of China.

The "optimal tariff" theory explains the benefits for great economic powers such as the US of high customs duties, as a lever to compel trade partners to open their domestic markets or to renounce economic policies considered harmful to US interests. President Trump thus imposed the renegotiation of regional agreements such as the North American Free Trade Agreement (NAFTA) and the United States-Korea Free Trade Agreement (KORUS). He also favors the negotiation of bilateral or regional agreements rather than the global mechanisms of the WTO, which he denounces.

Despite the hype, the consequences of this American-led return of protectionism could in fact remain modest for the World economy and even for international trade. In the case of the European Union (EU), where trade negotiators seem to be holding their ground in the face of Trump’s demands, the reduction of US-China trade could allow an increase of exports to the US. Above all, sorting out China’s fraudulent commercial practices and reforming WTO rules, as required by president Trump, would ultimately be a very positive step forward.

The return of tariffs and the proliferation of non-WTO trade agreements, however, remain contrary to the philosophy of openness that presided over international economic relations from 1945 to this day. Ultimately, two parallel trading systems – an American one and a Chinese one – could emerge.

Taken by surprise, China has yet to elaborate a clear response to what is certainly a challenge to its desire to expand its economic and commercial power around the world. China’s reaction will be decisive.

The Political Economy of the Metaverse
END_OF_DOCUMENT_TOKEN_TO_BE_REPLACED
Critical minerals: How to secure stable and resilient supply chains? Views from Europe...