Political Values in Europe-China Relations A report of the European Think-tank Network on China (ETNC), December 2018

What role do political values play in Europe-China relations 70 years after the signing of the Universal Declaration of Human Rights? 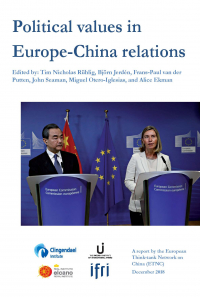 In its fourth annual report, the European Think-tank Network on China (ETNC), of which Ifri is a founding and coordinating member, examines how political values – namely democracy, human rights and the rule of law – shape Europe-China relations today. China experts from seventeen leading European research institutions have compared how these values inform the foreign policies of European states and the EU toward the most powerful autocracy in the world, the People’s Republic of China (PRC), and how the PRC influences the debate on political values in Europe.

The results display four different patterns of behavior among European countries: vocal and active; active and discreet; passive; and passive and potentially counteractive.

The report finds that three factors are of particular importance in making sense of differences in behavior among European countries:

Despite China’s increased efforts to promote its image abroad, in all the countries analyzed the general public and large sections of the political elite and media hold negative views of China’s political system.

Chapters of the report:

1) The role of political values in Europe-China relations

5) Political values in France-China relations, 2018: The start of a policy shift under Emmanuel Macron

10) Latvia: A pragmatic approach without making significant concessions to China

12) Political values in Norway’s relations with China: Standing ground or giving in?

19) Political values in EU-China relations: Towards a “principled” or a “pragmatic” approach?

Mitigating Geopolitical Risk – Japan as a Stabilizer in...
END_OF_DOCUMENT_TOKEN_TO_BE_REPLACED
Has the European Union risen up to the challenges of geopolitics? Europe after the Czech...