The Austro-French Centre for Rapprochement in Europe (ÖFZ) is a French-Austrian intergovernmental organization, founded following an initiative by then Prime Minister Jacques Chirac and Federal Chancellor Bruno Kreisky having the objective to develop economic relations between Western and Eastern Europe, and to take part in the construction of a Europe of peace.

After the fall of the Berlin Wall, the center focused its research interests on the problems of eastern enlargement of the European Union, and integrated in its field of activities countries such as Hungary, Poland, Czech Republic Slovakia, Slovenia, the Baltic States as well as Romania and Bulgaria. The French-Austrian Center is a forum for the exchange of ideas with the purpose of furthering the dialogue between representatives from the world of politics, the economy, and members of the civil society as well as academics from European member states and candidate countries. The center’s activities primarily deal with economic, political and geopolitical problems of the countries of Central and Eastern Europe : the center’s raison d’être as a space of reflection and dialogue was strengthened by the need of support and assistance of the new member states in the process of integration. Since 2004; the ÖFZ is orienting itself towards the new neighbors of the European Union, in particular towards the Western Balkans, countries imagining their future in a European perspective.

The summaries of all events organized jointly by the IFRI and theÖFZ  are accessible on the CFA's web page.

Both the Austrian and the French government account equally for the budget of the ÖFZ. Depending on the nature of the treated subjects, subsidies by the European Commission and public or private institutions also contribute to the funding of the events. The activities of the ÖFZ are decided by a directorate which elects among its members the president and the secretary general.

Advisor to the Executive Chairman, editor-in-chief of Politique étrangère and co-director of RAMSES

After years of lower interest, France has signaled its ambition to re-engage in the Western Balkans. It is not starting from scratch. Historical affinities with the countries of the region abound, in culture, sciences, politics, and economy.

The European Union: Caught Between the United States and China Politique étrangère, Vol. 86, No. 3, Autumn 2021

The United States and the European Union (EU) are now both in agreement regarding China – long viewed benevolently – as a systemic rival in the international order.

The coronavirus crisis has affected the countries of the Weimar Triangle to varying degrees. Bilateral relations between Germany and Poland as well as Germany and France have been strongly influenced by border closures, which have led to tensions between the countries. 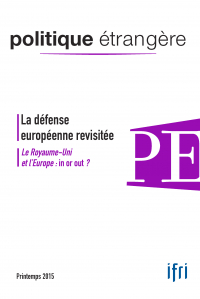 The Western Balkans and the Failure of European Enlargement Politique étrangère, Vol. 80, No. 1, Spring 2015

The process of European enlargement has been officially suspended for five years. Yet in the western Balkans it is rapprochement with Europe that publicly underpins the majority of political policy. 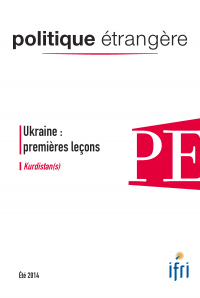 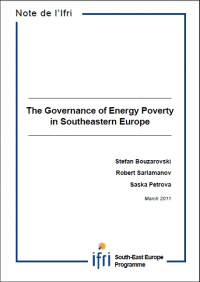 This report presents the outcomes of a recently-completed research project1 aimed at uncovering the different ways in which energy poverty – understood as a condition wherein the domestic energy services available to a household are below socially and materially necessitated levels – is... 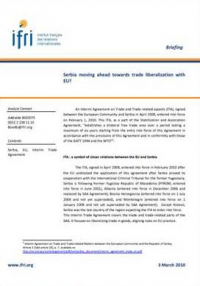 An Interim Agreement on Trade and Trade related aspects (ITA), signed between the European Community and Serbia in April 2008, entered into force on February 1, 2010. This ITA, as a part of the Stabilization and Association Agreement, “establishes a bilateral free trade area over a period...

An analysis of the 1999 NATO intervention in Kosovo in the eyes of international law and the UN Charter.

This study analyzes the new relationship between Russia and Western countries since the beginning of the 1990s.

How Realistic is a New Partnership Between Europe and Africa? Seminar

Neutrality and non-alignment after the Russian Invasion of Ukraine Videoconference

Registrations for this event will be closed on May 23rd.

Ifri/CFA  breakfast organised  with the Vienna Institute for Internation Economic Studies (wiww) in the Framework of the  Rencontres de Schwarzenbergerplatz.

A little more than 40 years since China's opening and reform it has risen to a comprehensive global power which is a strategic partner, but also a competitor and even a strategic rival for the EU. The expectation that China's system of governance would gradually converge with a liberal, open,...

Should the EU Recalibrate its Approach towards Russia? Side-Event at Globsec Bratislava Forum, Bratislava

EU-Russia relations have barely improved since the outbreak of the Ukrainian crisis in 2014. Geopolitical tensions remain vivid in the East and have rendered the situation across the EU’s neighbourhoods particularly volatile. During his visit in Warsaw in February 2020, President Macron...

The Post-COVID-19 Challenges to the European Union Visioconference

Minsk Dialogue Forum - Eastern Europe: In Search of Security for All International Conference

The post-Cold War international order continues to generate contradictions and vulnerabilities. Stability and predictability based on trust and effective institutions are being undermined by both old and new conflicts. Cooperation increasingly gives way to unilateral actions as states and...

The Eastern Partnership Reflection Forum 2017 (EaP-RF) is an initiative inspired by the on-going “EU-Western Balkans Reflection Forum Initiative” (WB-RF). The latter was launched in 2015 in support of the so-called “Berlin Process”, an intergovernmental initiative aimed at promoting reforms...

The Western Balkans in the European Union: Perspectives of a Region in Europe? International Conference

Neutrality and non-alignment after the Russian Invasion of Ukraine

The Russian invasion of Ukraine has reignited discussions about the status of neutrality and non-alignment in several parts of Europe.

By: Éric-André MARTIN, an article published on Visegrad Insight

The debate on the financial perspectives of the European Union (EU) is traditionally part of a complex dramaturgy, which borders on the cacophony: the proponents of more European solidarity oppose supporters of a fair return, defenders of traditional sectoral policies confront the promoters of...