Reforming Ukrainian Defense: No Shortage of Challenges Russie.Nei.Visions, No. 101, Ifri, May 2017

Ukraine’s conflict with Russia has highlighted the catastrophic state of Ukraine’s defense apparatus.

France’s current presidential campaign has created an unprecedented situation fuelled by revelations and a total absence of restraint, but it has not truly taken account of the disruptions of the last year: Brexit, the attempted coup in Turkey, the election of Donald Trump, the recapturing of...

As the US-led international system struggles under the strain of multiple challenges, the complex web of relations between Russia, China, and India will be critical to the formation of a new world order.

Kadyrovism: Hardline Islam as a Tool of the Kremlin? Russie.Nei.Visions, No. 99, March 2017

This paper analyses the phenomenon of “Kadyrovism” as a relatively coherent ideology which possesses its own internal logic and propaganda tools and which reflects the reality of Ramzan Kadyrov’s rule, based on submission to Vladimir Putin while also being marked by provocative acts directed...

Twenty-five years after the fall of the Soviet Union and the declaration of independence by the republics of Central Asia, the issue of guaranteeing stability and security still looms large on Central Asia’s agenda. 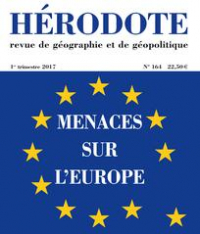 By: Maxime AUDINET, and Kevin LIMONIER

The article discusses Russia’s informational and digital strategy towards Europe. It focuses on its content, instruments, infrastructures and techniques.

Current hostilities between the United States, NATO and Russia, though they might not be at Cold War levels, do indicate real danger. NATO’s continued expansion toward the east and the deployment of defensive American antimissiles in Europe constitute serious strategic problems for Moscow.

What will become of US foreign policy under Donald Trump? A selection of Ifri researchers has come together to offer their thoughts on this question. Our experts cover an array of topics through 14 contributions, ranging from the future Sino-American relations, through US engagement in the...

Russia and Central and Eastern Europe: between Confrontation and Collusion Russie.Nei.Visions, No 97, November 2016

Since the start of the Ukraine crisis in early 2014, the states of East Central Europe have become increasingly important targets of Russian economic, political and military pressure. Russia finds itself in the trajectory of geopolitical retreat on the Western “front”, and seeks to slow...

Russia is Back: How Did Putin Do It ?

How Threatened Does Georgia Feel?

In May 2006, Ifri welcomed Mikheil Saakashvili, President of Georgia who came to explain his strategy about euro-atlantic integration...

Will there be a significant change of policy, in Russia itself and in its foreign affairs, during Putin's third term as president?
...

Russia Offers Up to $20 Billion to Help Shore Up Euro

BRUSSELS — Russia said Thursday that it might pledge up to $20 billion via the International Monetary Fund to help stabilize the euro, highlighting the effects of the sovereign debt crisis on Europe’s global influence.

Russia's blogosphere has until recently been largely written off as a politically blunt parallel space. The Facebook mobilisation of 50,000 protestors has challenged such assumptions, writes Julien Nocetti.

By: Tatiana KASTOUEVA-JEAN,   in Research Fortnight

The clear dividing line between Russia’s state and nonstate higher education establishments is evident even in official statistics and national ratings. During the 1990s it became a cliché that the non-state universities could not offer a good level of training.

The latest international research report from Thomson Reuters says one thing about Russia: the country’s share in global scientific activities—publications or patents—is small and declining.