Skip to main content
You are here
Home > Looking Ahead to COP21: What Korea has done and what Korea should do
Publications Editorials
Suh-Yong CHUNG

Looking Ahead to COP21: What Korea has done and what Korea should do Actuelles de l'Ifri, June 2015

Korea is the world’s 14th largest economy but the 8th largest emitter of CO2 as of 2013, due largely to an energy-intensive industry structure. Although it has continuously reduced its dependency on petroleum since it introduced the Energy Master Plan in 2008, the relative portion of non-fossil fuel sources, such as renewable energy, is still marginal at best (representing less than 10 percent of the total energy portfolio). In particular, it is difficult for Korea to increase the portion of renewables for various reasons. In this context, Korea has tried to find an adequate role in fighting against climate change. 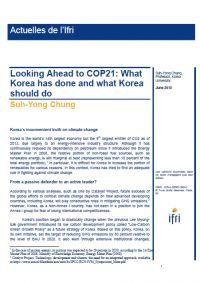 According to various analyses, such as one by Catalyst Project, future success of the global efforts to combat climate change depends on how advanced developing countries, including Korea, will play constructive roles in mitigating GHG emissions. However, Korea, as a Non-Annex I country, has not been in a position to join the Annex I group for fear of losing international competitiveness.

Korea’s position began to drastically change when the previous Lee Myungbak government introduced its low carbon development policy called “Low-Carbon Green Growth Policy” as a future strategy of Korea. Based on this policy, Korea, on its own initiative, set the target of reducing GHG emissions by 30 percent relative to the level of BAU in 2020. It also went through extensive institutional changes, including establishing the Presidential Committee on Green Growth, introducing an Emission Trading Scheme (ETS), and adopting various laws and regulations in accordance with its low-carbon green growth policy. Korea strived to take an active role at the international level in various fields. For example, Korea is a non-Annex I country that sets the East Asia Climate Partnership as an ODA program, and established the Global Green Growth Institute, which became an intergovernmental organization in 2012 and successfully hosted the Green Climate Fund in the same year. In the post-2012 climate change negotiations context, Korea led negotiations by initiating discussions on NAMA Registry, which plays as a platform of recognition for mitigation actions by developing countries.

Despite some concerns regarding the continuity of Korea’s active role in addressing climate change by the current Park Geun-hye administration, there are a good number of positive signals on Korea’s prolonged proactive role in addressing climate change, notably under its Creative Economy Policy. President Park clearly stated that climate change is an integral part of the Creative Economy at the opening ceremony of the Secretariat of the Green Climate Fund (GCF) in December 2013. She reiterated similar statements on other occasions, including the Climate Summit Meeting in New York in 2014. Indeed, it is noteworthy that Korea became the first non-Annex I country to promise a significant financial contribution to the GCF, which would total of 100 million USD.