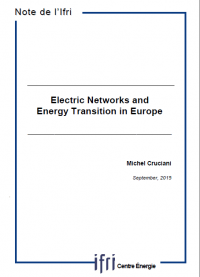 Consequently, a tight European regulatory framework is applied to these networks, in order to monitor their mandate and income. However, it does not impose any common rules, so that tariff disparities might adversely affect competition. Today, "market coupling" facilitates intra-European electricity trading, despite the relative scarcity of cross-border connections between some countries in Western Europe. The rules are more heterogeneous for the distribution networks, which provide power delivery within a small area.

In most countries, the energy transition largely relies on renewable electricity sources, especially wind and solar. Two requirements appear with their development: reinforcing the distribution networks on the one hand to accommodate this new power generation, and increasing interconnections on the other to export excess volumes during certain periods. These requirements would be gaining a more acute nature if the objective for 2030 was confirmed, as the share of renewable electricity would then reach 45%. For the European Commission, increasing the interconnection capacity would bring two other advantages: firstly, extended access to the cheapest power generation facilities, which would be reflected by a drop in wholesale market prices and their convergence at European level; and secondly, improved security of supply, physically by expanding the scope able to assist when necessary, and economically by the opportunity to extend the role of market instruments. The European Union (EU) is therefore selecting an objective of 10% for 2020 and 15% for 2030 of interconnection capacity for each country.

Networks reinforced in this way are at risk of overcapacity and consumption only increases slightly with the introduction of new uses such as electric vehicles, or even reduces because of energy efficiency programmes, also conducted in the name of energy transition, or because of advances in power storage devices. The economic equilibrium of system operators will then require increasing transmission tariffs, and most probably an increase in the fixed component of the tariff. This may ultimately introduce a sort of capacity compensation which could rise if energy efficiency policies were successful. This expectation undermines the expected wholesale market price gains, incidentally calculated with assumptions on the price of fuels and CO2 that we are entitled to discuss. The convergence of the market prices will by no means be sufficient to affect the retail prices, or compensate for the differences from costs imposed nationally, or reduce the distortions of competition caused by the different exemption schemes for certain categories of consumers. Finally, by letting the markets act to better ensure their security of supply, several Member States run the risk of increasing their dependence on neighbouring countries, losing part of their power generation facilities, and incurring less choice of sources to make up their electric mix.

Emphasising the difficulties does not involve having to give the project up. However, the findings suggest vigilance in conducting network extensions and reinforcements, by continuously striving to control expenditure, boost the operation's growth potential through industrial policy measures, compensate for the resulting increased electrical interdependence with a common governing body, and to ensure the sharing of knowledge gained, so that the energy transition launched in this way is seen as a shared project.

The Right-wing Extremism in Germany. An Underestimated...
END_OF_DOCUMENT_TOKEN_TO_BE_REPLACED
Economic and political rivalries in Russia's energy sector