Skip to main content
You are here
Home > Publications > Reports > Brexit, Electricity and the No-Deal Scenario: Perspectives from Continental Europe, Ireland and the UK
Publications Reports

When it comes to energy and electricity in particular, there can be no winner in the Brexit negotiations. The only reasonable objective should be to minimise losses and avoid trade friction. 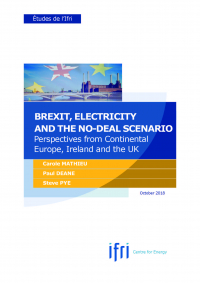 Brexit, Electricity and the No-Deal Scenario: Perspectives from Continental Europe, Ireland and the UK Download
1.49 Mo

Both the United-Kingdom (UK) and the European Union (EU) remain committed to making substantial progress in negotiations and enabling an orderly withdrawal on March 30, 2019, but the prospect of a no-deal or hard Brexit with no transition period looms large on the horizon. While what was once considered an extreme scenario, there is little doubt that energy will continue to flow through the infrastructures that physically connect Great Britain (GB) with the adjacent EU energy systems. Preserving cross-border energy trading, and in particular electricity trading, is in the interest of all stakeholders, be they UK or EU-based, and all efforts should focus on trying to minimise market disruption.

Yet, Brexit risks reversing two-decades of effort in harmonizing rules for cross-border electricity exchanges and could lead to a sub-optimal use of existing interconnectors, while also implying a higher reliance on domestic resources to provide the same energy and system services. The further the EU goes with energy market integration and decarbonisation policy, the greater the likely welfare losses of excluding the UK from the internal electricity market. The isolated nature of the GB electricity system and complementarity between generation mixes and renewables deployment in different Member States is a strong argument for further developing interconnection with the EU27. Backed by these fundamentals, the five most advanced interconnector projects are likely to reach completion in all Brexit scenarios, leading to a two-fold increase in cross-border capacity (from 4 to 9.8 GW by 2023). That said, the regulatory and political context may become more challenging for projects in early development stage, in particular if the contribution of GB interconnectors to security of supply is questioned or where it is considered no longer possible to maintain a level playing field between domestic generators and imported power. As a full member of the EU Internal Energy Market (IEM) with major hydropower assets, Norway may take advantage of the situation and gain stronger EU support for its interconnector projects.

From the perspective of Ireland, if the UK’s legal and regulatory framework were to diverge from that of the EU, security of supply and options for decarbonisation of electricity may be adversely affected, while the all-Island electricity market could be fundamentally undermined. A new set of trading arrangement would have to be developed, differing as little as possible from the European target model while being legally and operationally distinct from the EU-wide mechanisms. However, time is of the essence and the less time authorities have to clarify the practical hurdles of implementing new regulatory and governance structures, the more likely the disturbances to markets post March 2019. Looking beyond the immediate impact of Brexit, the case for building a new interconnector between Ireland and France should be refocused, as this project has the potential to increase social welfare in both countries and to improve connectivity of Ireland to the rest of the IEM.

The European energy landscape will be challenged by Brexit, also because of the implication for the UK’s likely move to an independent climate policy package. Despite the UK’s commitment to preserve a high level of climate ambition, stepping back from all EU climate-related legislation could have a disruptive impact and in particular create legal uncertainty which may slow down actual progress in reducing greenhouse gas (GHG) emissions. The transition to a low carbon energy system will require large levels of new investment to fund a much more capital intensive system and these investments risk being delayed due to the lack of clarity on the civil nuclear oversight scheme, the carbon pricing arrangements and more generally because of the risk perception and the more limited access to public funding. The UK could face tighter capacity margins than anticipated and have to pay a higher price for ensuring its security of electricity supply.

Brexit has no upside for the energy sector and it is both the UK and the EU’s responsibility to acknowledge the harsh reality that decarbonisation will be more complex and costlier if EU-UK cooperation is reduced or halted. Energy is a long-term business and effective climate action requires a stable and robust political environment. In this context, clarity on the future terms of any deal is crucial to both mitigate the immediate adverse impacts by developing fall back options to be introduced as soon as the UK becomes a third country, and also to anticipate the inevitable shifts in energy policy strategies.

China's Ambitions in Space: The Sky's the Limit
END_OF_DOCUMENT_TOKEN_TO_BE_REPLACED
The Arctic: Seizing Opportunities and Safeguarding Stability...