In recent years, Denmark has steadily emerged as a leader and role model in the global green energy transition. Its greenhouse gas (GHG) emissions since 2010 have been reduced at greater pace than those of the European Union (EU) average. 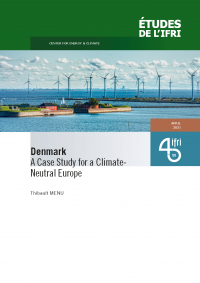 Denmark: A Case Study for a Climate-Neutral Europe Download
0.66 Mo

This transformation is all the more impressive, given that the country used to be a significant oil and gas producer which also relied heavily on coal for power generation. From its highly publicized success in offshore wind, to its ambitious goal of cutting GHG emissions by 70% by 2030 - which would put Denmark as a European and global frontrunner, with only Finland being more ambitious and planning to be climate neutral already by 2035 – as well as its pioneering green energy policies, the country has transformed itself into a beacon for low carbon technologies and public policies. The country has a record high share of renewable energy sources in power generation, with wind in the lead. Given the recent announcements and climate goals set by the Von der Leyen Commission, Denmark serves as an interesting case study for other European and world nations alike on how to embark on their own energy transitions. This paper assesses whether the country is really successful in accelerating even more than its European peers in its decarbonization process. And if so, what is so special about Denmark and what can be learned from its transformation?

Policies range from well-publicized successes, such as the country’s ability to nearly rid itself from coal in its power mix in less than thirty years by increasingly developing its wind power potential, in leading the offshore wind segment and championing repowering, but also its lesser-known achievements, such as the diffusion of combined heat and power (CHP) and district heating across the country. Another success point of the country’s strategy relies in promoting energy efficiency in the industrial sector as well as its use of energy taxation for enhanced decarbonization, even in challenging sectors such as transportation.

Questions remain open, especially concerning the sustainability credentials of biomass, a fuel which is a key component of the country’s energy mix, but also the future role of natural gas, which has an important balancing role in power generation, given the country decision to rid itself of oil and gas (O&G) production by the middle of the century.

To a large extent, the Danish success story so far can be linked to a combination of socio-political factors including:

However, it would be somewhat reductive to simply equate Denmark’s success story to these previously mentioned factors. Indeed, the Scandinavian nation also benefits from certain geographical dispositions which are great assets for its path to decarbonization. For one, the country is ideally placed to develop variable renewable energy sources, most notably wind power given its topography and its strong wind resources. On top of this, Denmark also benefits from an incredibly reliable and interconnected power grid thereby making renewable energy integration into the wide energy system all the easier. In addition, the fact that its power grid is one of the most interconnected in Europe entails that excess renewable energy production can quickly be exported when the wind blows, just as imports can hastily be called upon when wind is found to be lacking. Finally, from a more socio-political perspective, the relatively flat social structure of Danish society as well as the country’s high level of institutional trust, makes policymaking and policy implementation simpler as well as more effective than in other European states.

As such, although this paper identifies important lessons to be learnt from Denmark’s decarbonization strategies, the context as well as the particular characteristics of the country in which these were implemented should nevertheless be considered when seeking to establish similarly successful carbon reduction policies.

In any case, Denmark is still far from coming close to achieving its objectives and will have to accelerate its decarbonization on all fronts: the country’s current total primary energy supply still relies for 60% on fossil fuels.

France vs. Turkey in the EastMed: A Geopolitical Rivalry...

What is left and to whom? Germany’s left-wing party Die...

Multilateralism – broadly understood as a form of institutionalized interaction between...

As its firms become more competitive, China is increasingly well positioned to define the...