The Landscape of Renewable Energy Sources in Europe in 2030 Etudes de l'Ifri, June 2017

The study analyses the European rules designed to promote renewable energy, highlighting their innovations and the difficulties they will raise. The study highlights the consequences of some of the measures envisaged and pays particular attention to the electricity market. 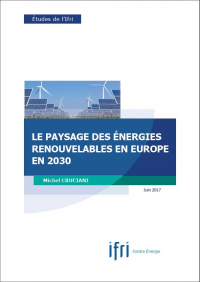 On 30 November 2016, the European Commission issued a new set of proposals, the "Clean Energy Package", covering a wide spectrum of activities. This study analyses the provisions of this package which aim at improving energy efficiency by 30% and giving renewable energy a share of 27% of consumption by 2030.

In 2014, Member States had called for these objectives to be assessed for the entire European Union. Nevertheless the Commission wishes to obtain a mandate to check that each State makes an honest contribution to the collective effort. The study stresses that the 30% target for energy efficiency weakens the role of the CO2 market. The simulations reveal that this weakness will benefit coal, which keeps in 2030 a higher share than it would have occupied with a target of 27%, whereas natural gas is penalized by a low CO2 price. It also appears that by remaining too low, the price of CO2 will discourage certain investments in favour of renewable energies that would have naturally emerged with a high price. Therefore it will be necessary to roll out costly public policies to trigger these investments, so that the share of these energies totals 27% by 2030.

The simulations also show that the renewable energy target will be largely achieved through very rapid growth of wind and solar power. The proposals of 30 November 2016 hence are drafted to encourage the development of these two sectors by reforming the electricity market so that it establishes a price that is remunerative and reduces the need for public aid, while clearly reflecting the burdens generated by the different actors. It seems unlikely that the Member States will accept such a profound market reform as the Commission envisages, but assuming that they agree, it would not completely eliminate the need for aid for renewable sources of electricity. The study points out the difficulty of guaranteeing a fair distribution of costs, in particular for expenses incurred on the grids by new connections, which the package plans to facilitate, or self-consumption, which it plans to encourage. Furthermore, there is no evidence that restricting the scope of the network operators leads to economic optimization while preserving the quality of supply.

The Clean Energy Package includes innovative measures in the heating (or cooling) and transport sectors, which can result in suppliers having to incorporate an increasing volume of renewable energy into their fuel sales. In these sectors, the sustainability criteria for bioenergy and the accounting of CO2 stored in biomass might benefit imported products (wood pellets, biofuels) and electrical solutions (heat pumps, battery-powered vehicles).

If the entire package is adopted, the simulations for 2030 indicate that renewable energy will account for 49% of the electricity consumed (20% wind and 9% solar) and 26% heat or cold use. In transport, biofuels will provide 7% and renewable electricity 1% of energy. These figures hide a very variable distribution across countries. The risk of worsening inequalities, between regions and between categories of consumers, is a weak point, which calls for reworking the Clean Energy Package or complementing it with external measures. Taking this concern into account will mitigate disappointment if the promised jobs in turn concentrate only on specific regions and distinctive sectors of activity.