Europe has become a frontrunner in fixed offshore wind. Can this success story be replicated with floating offshore wind, a technology that would lift the sea depth constraint and thus open up wider market opportunities? This research study looks at the main success factors for this emerging industry. 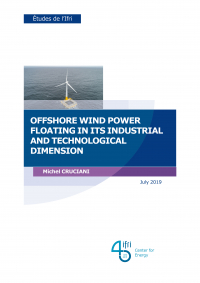 Bottom fixed offshore wind already belongs to mature renewable energy sources, with remarkable technical and economic performance. The European Union is the largest development hub for this technology, with 18.3 gigawatts (GW) installed by the end of 2018 (more than half of them in the UK), but other countries have also commissioned significant capacity (4.6 GW in China) or are preparing the launch of major fleets (East Coast of the United States). However, wind turbines on foundation can only be installed on a shallow ocean floor, such as in the southern part of the North Sea, an uncommon characteristic round the world.

Floating offshore wind technology breaks free from this constraint. Several European countries have encouraged its development by testing various models of floats, firstly with prototypes, then with industrial-scale demonstrators, and today with pre-commercial farms each with a capacity of several tens of megawatts (MW). Every step allows to validate technical answers to the formidable difficulties to face, in particular to ensure the greatest possible stability to the turbine despite the swell, in order to reduce the amplitude of vibrations, a destructive phenomenon for the components. Five float models have passed this test and are now found in various projects at pre-commercial stage; these are aimed at garnering further progress in mooring and electrical connection.

Floating facilities that reach the pre-commercial stage use conventional turbines, which equip bottom fixed offshore wind turbines, and their floats were designed by companies with long experience in the oil industry or shipbuilding. In parallel, innovative models of floats and turbines are being tested and could break through later on. All projects receive financial assistance, in the form of subsidies or attractive loans, and the electricity they generate is purchased at a fixed subsidized price. These are small series (three to five machines) and their novelty involves risks for capital providers and insurance companies.

Floating wind turbines have a major advantage: they are assembled in the port and then towed on site by an ordinary tugboat, which can also tow them back to shore for heavy maintenance or final dismantling. This specificity nourishes the conviction that the technology will become competitive when it benefits from scale effects generated by the launch of long series and from learning effects reducing operating costs. However, the European States that have supported the launching of this technology up to the present day are reluctant to pursuing their efforts on a larger scale, in a period of budgetary discipline and acute international competition, which makes it necessary to keep energy prices as low as possible.

Europe has gained a significant lead in the management of floating offshore wind due to its valuable skill set in this area; in addition, floating wind turbines use multiple components developed for the offshore oil and gas industry, whose value chains are partly European. However, the EU could be caught up or overtaken by competing countries that have perceived the potential of this sector and want to participate in its industrial deployment. Because they lack visibility on opportunities in Europe, our pioneering companies ineluctably establish partnerships overseas, with the aim of making the most of their achievements.

The analysis suggests that the sector is likely to take an important role in the upcoming energy transition. Since no European State alone can assume the costs of boosting this technology, it would seem wise to set up a "European alliance of floating offshore wind" to accelerate its development and reinforce the position held by our industry in its global deployment.

China's Ambitions in Space: The Sky's the Limit
END_OF_DOCUMENT_TOKEN_TO_BE_REPLACED
The Arctic: Seizing Opportunities and Safeguarding Stability...