Over the past decade, facilitating the widespread deployment of renewable energy sources (RES) and enabling their integration within the energy systems has become a central priority for various international organizations (IO) and initiatives. 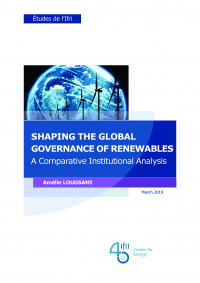 The architecture of a global renewable energy governance was first shaped by the International Energy Agency (IEA), which extended its initial scope of activities to tackle electricity market development, security issues and the specific challenges of low carbon technologies, especially RES such as wind and solar. Since then, new institutions with a dedicated yet global mandate such as the International Renewable Energy Agency (IRENA) have been launched. Beyond these intergovernmental energy agencies, other initiatives such as the Renewable Energy Policy Network for the 21st Century (REN21), the Clean Energy Ministerial (CEM) and Sustainable Energy for All (SEforALL) have been set up to address the need for greater international cooperation between public and private stakeholders, further expanding this governance architecture. The recent adoption of the 2030 Agenda for Sustainable Development and of the Paris Climate Agreement have created a renewed momentum for RES and led to the launch of complementary initiatives, such as the International Solar Alliance (ISA), the Africa Renewable Energy Initiative (AREI).

The IEA is the most mature of these institutions, and one of the most impactful thanks to a comprehensive expertise on the entire energy system. Yet in spite of its effective effort to reach out to key emerging economies, staff and membership restrictions limit its outreach, especially in Africa.

IRENA encompasses five times more members, which in theory enables it to reach out to more countries, including smaller ones. Yet, it is still in a maturing phase and its governance could be slowed by such a high number of countries and interests.

The recently established ISA is geographically and technology-focused as it specializes in maximizing the solar power potential of countries between the tropics. While it will take a few more years to assess its output and activities, it could play a key operational role, for instance in Africa, as it aims to tackle all solar power deployment challenges, including regulatory, financial and technical aspects.

This governance architecture, although multi-layered both from a geographical and technology point of view, is often complementary. It reflects several key sectoral trends: the falling costs of RES, their global deployment especially in emerging economies, the development of global value chains, all of which require a common effort of analysis, coordination and cooperation. Another critical missing aspect is that while institutions tend to work with governments and the private sector, they will increasingly have to include the role and actions of the non-governmental sector and of local entities, especially cities.

Last but not least, it is representative of political and geopolitical considerations, related to countries’ strategies to push for specific technologies or focus areas, and promote their national and sometimes competing interests. The United States (US) and Japan are very influential within the IEA, Germany is very supportive of both the IEA and IRENA, while India and France are key backers of ISA. China is involved in all these institutions – it could possibly even join the ISA.

As member states are the ones defining these organisations’ mandate and scope of activities, it is of their responsibility to come together and strive to streamline their work, resources and frame their cooperation to maximize each institution’s added value.

The Political Economy of the Metaverse
END_OF_DOCUMENT_TOKEN_TO_BE_REPLACED
Critical minerals: How to secure stable and resilient supply chains? Views from Europe...