Promoting political values (democracy, human rights and the rule of law) in China is a colossal undertaking, but the EU could be more effective than we think. To do so, it must act strategically, in unity, and in concert with like-minded partners. It must also strengthen its record of upholding political values and reform its procedures for foreign policy decision-making. 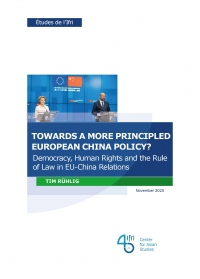 On 30 June 2020, China adopted a National Security Law for the Hong Kong Special Administrative Region that not only undermines human rights and the rule of law that were promised to its citizens, but also violates international law. A few weeks before, when China’s intention became public, the European Union reacted cautiously, expressing concern but clarifying that the introduction of the law would not adversely affect its relations with China. The EU’s first reaction fell far short of statements released by the United States, the United Kingdom and Australia, among others. But the EU’s reaction grew more critical over time. The first EU institution to adopt a tougher approach was the European Parliament. Shortly after, the European Commission and – to a lesser extent – the European Council followed with statements by its presidents after the EU-China summit held on 22 June 2020.

This episode could turn out to be exemplary for the role of political values in the European Union’s relations with China. China and Europe have fundamentally divergent political values, even though they often use the same terminology. For a long time, many Europeans believed that China’s definition of democracy, human rights and the rule of law –, the three constitutive values enshrined in the Treaty of the European Union – would ultimately converge with the European understanding. This has not turned out to be the case. China is growing more self-confident, not only defending but starting to spread its own definitions of the triad of political values.

This comes at a time when the EU is realigning its China policy more generally. The new European Commission strives to be a “geopolitical” entity strategically engaging to achieve concrete results in its bilateral relations with China. The starting point of this shift is the 2019 “Strategic Outlook” developed by the European External Action Service, which defines China not only as a “partner”, but also a “competitor” and a “systemic rival”. On political values, China clearly is a “systemic rival”.

The crucial question is whether “systemic rivalry” in the field of political values carries implications for other policy fields in which the EU and China are partners or competitors. A general consensus that the EU should adopt a more principled China policy and defend and promote its political values spells out very differently across EU institutions. By institutional design, the European Council is a pragmatic rather than principled institution. Compromise resulting from bargaining among member states with different interests shapes its approach. At the other end of the spectrum, the European Parliament serves a principled watchdog function, but has very limited competencies in foreign and security affairs. The European Commission strives to overcome the decades-old challenge of policy silos resulting from its fragmented institutional structure and the more than 60 sectoral dialogues with China. This carries the potential to turn more principled. However, to this day it is not clear whether the European Commission will make the promotion of political values a policy priority even if this comes at the cost of economic cooperation.

This paper outlines ongoing debates on the EU’s new China policy and the role of political values in it, and provides 25 concrete policy recommendations for a more principled China policy that defends and promotes democracy, human rights and the rule of law.

Building Bridges over the Blue Pacific. Beyond Marine...
END_OF_DOCUMENT_TOKEN_TO_BE_REPLACED
Asia after the War in Ukraine: Re-imagining multilateralism and the risk of...