This study analyses the evolutions of Sweden's energy choices, including in terms of nuclear power policy, carbon tax and renewable energies development. Considered as one of the most outstanding example of successful energy transition, Sweden might well face difficulties similar to those of other European countries in the near future. 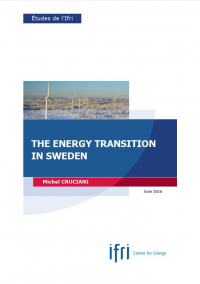 Sweden has the distinction of having started several major changes to its energy supply at an early stage. The country has no fossil reserves, and so was importing increasing volumes of oil products in the years following World War II. Yet it rapidly perceived the geopolitical risks generated by such oil dependency, and so developed its nuclear capacity, enabling it to reduce quickly the role of oil in its economy after the shocks of the 1970s.

Sweden has also managed to exploit its natural resources. Until the 2000s, hydropower was able to enter the market without public assistance. By contrast, wood could not have gained its current market share without a policy combining public aid for investment and penalties for competing energies. The severe economic crisis which hit the country between 1991 and 1993 led such penalties being converted into taxes, notably a tax on CO2 emissions that came into force in 1991. This helped Sweden reconstruct its tax system, to finance its social model. The challenge highlighted the country's ability to generate consensus policy guidelines.

One of these guidelines was to react immediately after initial warnings about climate change. Sweden first strengthened its energy efficiency policy, structuring field actions through a national agency backed up by partner organizations in local communities to help consumers –individuals or industries – technically and economically. Sweden then adopted an unusual instrument to promote renewable electricity, namely its system of green certificates. Implemented in 2003, this system has spurred the development of the cheapest sources of renewable energy, two-thirds coming from onshore wind and one third from biomass. The cost of this support still remains remarkably moderate today.

At the end of 2014, Sweden thus only used fossil fuels to provide 30% of its primary energy supplies, while renewables accounted for 52% of final energy consumption. Energy consumption per capita remains high, but relative to GDP it is exactly equal to the average for Western Europe (EU 15). Regarding emissions of greenhouse gases, the country had the lowest carbon footprint in 2013 within the EU15, both in terms of GDP and per capita use. Moreover, while environmental taxes raise the price of gas for industry substantially, they do not affect fuel prices overly. Nor do taxes prevent electricity prices from being among the cheapest in Europe, both for industry and for households.

The current situation seems to be excellent. As a result, Sweden’s political leaders have chosen to keep its underlying foundations and to carry out only moderate changes. Thus, while stating their preference for renewable energy, the major political parties have found common ground to reduce tax pressures on nuclear power, since 2014. In June 2016, the Parliamentary majority and opposition parties signed an agreement to modernize Sweden’s fleet of reactors, thus further demonstrating their sense of compromise. This solution is designed to limit the rise in electricity costs and to lengthen the period available for alternative energy sources to reach maturity. In addition, the agreement extends the provisions promoting renewable power, but it also emphasizes the importance of managing the demand for capacity as well as the efficient use of electricity, giving consumers of power an active role, be they industrial or domestic users.

In short, Sweden seems to have taken measure of the difficulties faced by some European countries which are already engaged in the energy transition and is trying to avoid them. Its political actors have been careful not to adopt excessively restrictive short-term goals and are content with general guidelines: they are betting on innovation to move forward. In this regard, Sweden has a major advantage, alongside the efforts made for several years, favouring research and development in a very structured way. The recent agreement consolidates these efforts.