Mixing Business with Europe: What Role for Companies on the Future of the EU? Etudes de l'Ifri, January 2018

The European Union is facing what the European Commission President, Jean-Claude Juncker, calls a ‘polycrisis’. The EU is under increasing pressure to deliver and address citizens’ concerns. 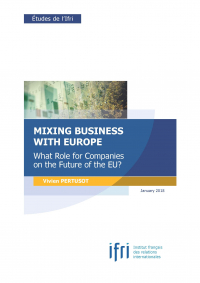 In a context of mounting criticism, with the spread of eurosceptic arguments in political discourse and the beginning of serious debates on the future of the EU, it is important to question how European companies perceive the EU today and whether there is a distinct role they can play to improve the situation.

A European company is defined broadly as any company founded and headquartered in an EU country which operates in more than one Member State. Regardless of its founding date, its sector or size. This present report also delves into the European company (SE) statute, its relevance both in legal and political terms and its lukewarm achievements 15 years after its inception.

Moreover, the analysis looks at the potential risks that a weakened EU could carry for the business environment, especially with respect to innovation and the EU’s capacity to export its norms abroad.

The argument is that businesses still participate in sector-specific policies but have, on average, disinvested from larger debates on the EU since the launch of the internal market and the euro. Three reasons may explain this situation: a feeling of familiarity, a failure to realise that Europe increasingly poses political risks which could sustainably affect the business environment, and a natural reallocation of resources and intellectual capital toward fast-growing markets.

Considering the possible impact of growing uncertainty in Europe, European companies should re-think their approach to Europe. The current debates are not merely technical or legalistic – they deal with politics. But it is not only the role of policymakers or civil society to be active in them. The business community has a vested interest in participating in these debates. They can approach the issue from a particular field, be it the sector they do business in or a topic that they want to promote, and broaden it to make it more encompassing. Many companies already attempt to promote particular concepts or topics, but too seldom do they link them up with Europe. A strong and reliable EU is not a lofty slogan, it is a business case.

Mixing Business with Europe: What Role for Companies on the Future of the EU?
Download
1.17 Mo
Keywords
Business companies Europe European Union France
ISBN / ISSN:
978-2-36567-717-2
Print this article
Back to top

Since 1983, the QUAD gathers every year, the SWP, RAND Corporation, Chatham House and...

Supercomputers and quantum computers: What roles in the technological power of Europe?...
Alice PANNIER
East Asia’s Evolving Economic Order: Toward Cohesion or Fragmentation?...

The era of hyper globalization is now transforming into an age of geoeconomics, where trade...