The Dilemma of Middle Powers: How AUKUS Has Reshaped the Potential for E3 Cooperation in the Indo-Pacific Notes du Cerfa, No. 166, Ifri, October 2021

The Indo-Pacific region is increasingly becoming the center of gravity of economy and geopolitics. It covers 60% of the world’s population, triggers 30% of international trade and drains 60% of global gross domestic product (GDP). 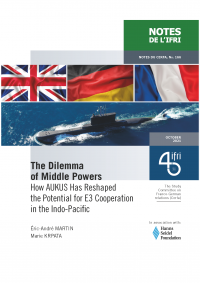 Moreover, the world’s biggest ports and airports and 20 out of 33 megacities in the world are located in the Indo-Pacific. The Indian Ocean and the Pacific Ocean, subsumed in the concept “Indo-Pacific”, have thus become a “vital commercial artery”. The Indo-Pacific also hosts a high number of growth markets for European companies, as numerous emerging economies are increasingly catching up with their Western counterparts.

Referred to as a powder-keg, the Indo-Pacific has also become the subject of tensions and violations of international law. Of all regions in the world, the Indo-Pacific is certainly the region where geopolitical conflicts are the most acutely perceived. Any disruptions may have impacts not only on the region but also far beyond because of the interconnection of economic activities and supply chains around the world, as the Covid-19 crisis showed in a very edifying way.

It is also a region where US-China rivalry has become most visible following “the pivot to Asia” strategy initiated by Barack Obama in 2011. Against the backdrop of this geopolitical complexity and because of the many challenges that confront the region, given the density of population, pollution, threat to biodiversity and climate-impacting activities – with consequences that extend even beyond the region – international cooperation is required.

The limited success of international organizations in finding adequate solutions has led to the emergence of new cooperation formats aimed at finding efficient, creative, and long-lasting solutions. These formats gather middle-sized powers concerned by the negative effects of a looming bipolarization of the international system. One of these formats is the E3, bringing together the UK, France, and Germany. Despite these countries’ differences in terms of footprint and strategic culture in the Indo-Pacific region, there may also be opportunities for cooperation, notably as far as security and environmental matters are concerned. The question remains whether the E3 as an entity could play the role of a “global broker” by proposing an alternative approach both to the United States (US) and to China, in cooperation with countries in the Indo-Pacific such as India, Japan as well as Indonesia, Singapore and Malaysia, with a view to upholding a rules-based order and answering the current and future far-reaching challenges posed notably by over-militarization and global warming.

However, recent developments, with the launch of the AUKUS partnership and the United Kingdom (UK)’s alignment with the US, have put this format into question, and the UK seems to have lost its quality as a “global broker”. How far can Europe nevertheless play a role in the Indo-Pacific, and what actions would this ambition require from the European Union (EU)?

Eric-André Martin is the Secretary General of Cerfa and Coordinator of the Initiative on the European Space Governance.

Marie Krpata works as a Research Fellow at the Cerfa where she dedicates her research activities to the European Union and the external relations of the Franco-German couple.