The introduction of the minimum wage in Germany: a first assessment Notes du Cerfa, No. 136, Ifri, February 2017

Germany introduced a minimum wage on January 1st, 2015 – a first in a country that had hitherto left it to the social partners to agree on salaries. This introduction came after vivid debates between those who fought against ever deeper inequalities and those who defended the nation’s competitiveness. 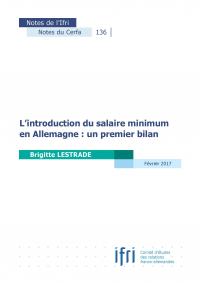 The minimum wage was foreseen in the 2013 coalition agreement between the Christian Democrats and the Social Democrats, and when the government, in light of this debate, proceeded to its introduction, they set it at a moderate level as compared to other European countries with 8.50 Euros per working hour which is clearly lower than the European average.

Moreover, some exceptions – youths, interns etc. – were admitted, as well as transition phases in industries where low salaries were very frequent. There is no yearly adaptation of the minimum wage to inflation like in France, but its increase is decided upon bi-annually by an independent Commission. This Commission has decided that the minimum wage would be 8.84 Euros from January 1st, 2017 onward. The small number of people touched by this measure, hardly more than 4% of all employees, mostly working within agriculture, the food industry, retail and gastronomy, often with a so-called “minijob”, partly explains why this minimum wage has had very little impact on employment rates.

Fears of rising unemployment have not materialized, but neither has a reduction of poverty as the continued existence of so-called Aufstocker shows – the latter being employees who receive additional payments by the state due to very limited incomes. Those companies who had anticipated the minimum wage have adapted well, in particular by hiring less people or by making their clients pay for risen costs. The current context – notably low energy costs, low interest rates and an underrated Euro – strengthens their competitiveness.

Brigitte Lestrade is Professor Emeritus of contemporary German civilization at University of Cergy-Pontoise.

The German Health care System in the Face of the...
END_OF_DOCUMENT_TOKEN_TO_BE_REPLACED
Conversation on Technological Change and its Implications, with Audrey Tang, Digital...