Once widely praised as one of the best shows on television, Homeland will be back for a fourth season starting next week. The show was originally intended as a breaking point with the one-sided and trigger-happy foreign policy of the Bush administration. However, Homeland is sadly turning out to be the reflection of Obama’s foreign policy, itself rather disappointing up to now. What will the new episodes tell us? 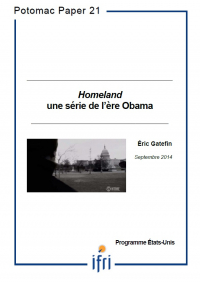 In the last decades, television series have become a force to be reckoned with in the social and cultural landscape of our societies.

Homeland, a psychological thriller set against the backdrop of CIA operatives and the Stockholm syndrome, began airing in 2011 and returns with a fourth season in October of 2014. The success of the show coincided with the establishment of a new attitude for the United States on the international scene, under the auspices of President Obama’s leadership. How did the show interpret the new workings of national security?

At first, Homeland seemed to offer a familiar mirror to the president’s foreign policy attitude, stepping away from a Manichean view of Islam and use of military force abroad. But quickly enough, the show’s narrative transformed into a critical reading on the use of drone strikes and the opacity of intelligence services, thereby condemning the practices of the Obama administration.

Yet the critical range and audacity of Homeland have dimmed over the years. Much like 24 before it, the series relies on an excessive use of paranoia as the driving force of the story, and the narrative often returns to stereotypical views of good and evil. The use of images – full of depth in the first seasons – quickly lost all subtlety.

After what seemed like a critical reading of George W. Bush’s interventionist, "trigger-happy" foreign policy, followed by an unfavorable report on Barack Obama’s new national security attitude, Homeland – despite its liberal credentials – remains conventional and even conservative in its form and narrative.

On a deeper level, Showtime’s Homeland can thus be seen as a somewhat accurate reflection of President Obama’s foreign policy, itself rather disappointing up to now.

Mitigating Geopolitical Risk – Japan as a Stabilizer in...
END_OF_DOCUMENT_TOKEN_TO_BE_REPLACED
Has the European Union risen up to the challenges of geopolitics? Europe after the Czech...