Sanctions and the End of Trans-Atlanticism. Iran, Russia, and the Unintended Division of the West Notes de l'Ifri, January 2020

Sanctions have become the dominant tool of statecraft of the United States and other Western states, especially the European Union, since the end of the Cold War. 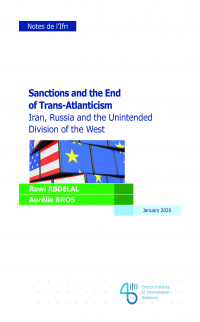 But the systematic use of this instrument may produce unintended and somewhat paradoxical geopolitical consequences. The sanctions imposed on the Islamic Republic of Iran and the Russian Federation in the field of energy are particularly illustrative of this phenomenon.

Firstly, Iran and Russia demonstrated their resilience and a real ability to adapt, thus transforming the perspective to European companies. One of Tehran’s responses to sanctions was to establish the so-called “resistance economy” in order to make Iran resistant to all kinds of economic shocks and reducing the reliance on a single commodity. For its part, Russia has adapted and offered new perspective to European and Asian businesses by creating a precedent with the case of Total. Some European companies are now ready to operate according to these rules—at least in the gas sector, as the oil is too risky relative to U.S. policy and law.

Secondly, differences in the approach of the United States and Europe over the type and intensity of economic statecraft against both Iran and Russia have increasingly undermined trans-Atlanticism. The so-called secondary sanctions imposed on both Iran and Russia have become the primary vehicle for signaling and even implementing a decoupling of U.S. and European political objectives. On the one hand, the costs of complying with U.S. secondary sanctions is perceived as too high for European companies. On the other, Europeans are not ready to bear the consequences of internal U.S. divisions.

All of this might even have reinvigorated the European project, by triggering a debate on the need for European countries to protect their economic sovereignty. The European Green Deal might become the emerging unifying theme that might relaunch the European project and make Europe a fully-fledged geopolitical actor.

Rawi Abdelal is the Herbert F. Johnson Professor of International Management at Harvard Business School and is the Director of the Davis Center for Russian and Eurasian Studies. His primary expertise is international political economy, and his research focuses on the politics of globalization and the political economy of Eurasia. Professor Abdelal is a faculty associate of Harvard's Weatherhead Center for International Affairs and de Gunzburg Center for European Studies, and he serves on the executive committee of the Davis Center.

Aurélie Bros is a lecturer at Harvard University and a Senior Fellow at the Davis Center for Russian and Eurasian Studies, where she is leading the Energy Project. This research program sheds light on the energy transition in Eurasia. An energy expert with ten years’ experience in the development of Eurasian and global energy markets, she has worked in international public service (European Commission and French Ministry for Energy), academia (Higher School of Economics in Moscow), think tanks, and the private sector. In addition to her research and policy work, Aurélie is actively engaged in European affairs, including the Franco-German dialogue.

On the same topic
The Sanctions Policy of the European Union: Multilateral Ambitions Versus Power Politics
Sanctions and the End of Trans-Atlanticism. Iran, Russia and the Unintended Division of the West
Download
1.1 Mo
Keywords
Secondary Sanctions Transatlantic Relations Iran Russia United States
ISBN / ISSN:
979-10-373-0120-8
Print this article
Back to top