Complementary solutions to national grid extensions let hope for significant improvements in the field of energy access, consistent with current economic and environmental challenges. This Note explores the regulatory and economic prerequisites that must be enhanced in order to support the emergence of mini-grid and off-grid technologies. 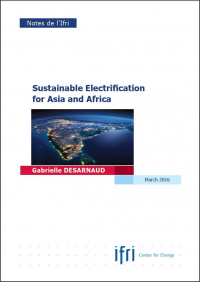 The Millennium Development Goals (MDG) were set up in 2000 in an unprecedented international commitment to eradicate extreme poverty by the year 2015. Yet, the height goals do not specifically feature access to electricity, forgetting the role energy access plays in development. While 1.2 billion people remain in the dark, or still rely on fossil fuels, biomass and candles for lighting, electrification is a catalyst for economic development. Electricity access gives households the chance to reallocate hours searching for fuel to other activities, help domestic microenterprises to develop or extends child education after school by substituting diesel and kerosen, used in generators, for a safer and cheaper lighting source.

In 2011, the UN launched the « Sustainable Energy for All » (SE4All) initiative, which finally united international organisations, development banks and public and private actors around common objectives, among which achieving universal electrification by 2030. In September 2015, promoting access to a safe and sustainable energy has become one of the major missions of the Sustainable Development Goals, taking over from the MDGs. However, the progress of electrification still faces numerous challenges such as a crucial lack of institutional capacities in developing countries, instable policy frameworks, unreliable data, limited financial capacities of people in need, and a robust demographic growth. Current investments are far from reaching the 32 billion dollar per year necessary according to the International Energy Agency (IEA) to fill the mandate of the SE4All.

Extending the grid is generally the most favored option considering its social and political impact, but does not always provide a sufficient service quality. Grid extensions require substantial investments in heavy infrastructures, which cannot be profitable in remote areas where population density remains low. Besides, the UN progressively highlights the fact that in places where grid connections do exist, the beneficiaries are exposed to regular blackouts. The example of China’s grid extension policy implemented over its whole territory confirms that this solutions is not always adapted.

Nevertheless, innovative and promising projects are flourishing in areas hardly reachable by grid extension policies. To this respect, Bangladesh has achieved remarkable results in decentralized rural electrification. Over the last decade, renewable decentralized electricity production systems developed, breaking technological barriers that have made these systems expensive, complex and unreliable for years. They benefitted from a 75% drop in the price of photovoltaic panels since 2009 and a 42% drop in the price of batteries since 2008. The emergence of these systems shows the increasing interest given to a new idea of what electrification might be, based on the concept of « energy ladder », in which the first step equals a minimum consumption level allowing the use of a few light bulbs. If this approach does not give access to the same level of electricity consumption per year than the one theoretically provided by the grid, at least it gives the opportunity for people in need to access rapidly a basic lighting service, more efficient than traditional solutions.

Poorly deployed at the moment, off-grid and mini-grid systems are increasingly raising support in a context of deep rethinking of our energy systems, pushing governments to consider innovative and sustainable solutions to face the challenges of poverty and climate change. Numerous obstacles still need to be overcome though, in order to create the conditions for a stable market and stimulate the contribution of the private sector.

Rapprochement in Times of Crisis: War in Ukraine and the...
END_OF_DOCUMENT_TOKEN_TO_BE_REPLACED
Neutrality and non-alignment after the Russian Invasion of Ukraine...