The US Electricity Industry and the Low-Carbon Transition

Transitioning to a low-carbon, decentralized and digitalized electricity system requires setting out new roles for incumbent suppliers, new entrants and consumers now generating their own power. Where is the US electricity industry heading and what does it say about market designs for the 21st century electricity system? 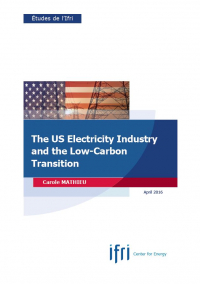 While the wave of liberalisation produced a fragmented, but now stabilised, industrial landscape, the US power sector is about to undergo another major transformation with the low-carbon transition. Against a background of combined weak demand for electricity, a boom in distributed solar PV power and a decline in the profitability of merchant assets, incumbent stakeholders are currently dealing with further questions about the future of their business models.

Driven as much by market forces as by government support mechanisms, these destabilising factors have an impact, which is still difficult to assess, but the need to control future transformation is already at the heart of debate. In areas where output is priced on the wholesale markets, new tools are being studied to secure compensation for some power stations, with the issue of possible excessive dependency on natural gas in the background. At the same time, an increasing number of states are questioning the design of their support mechanisms for distributed energy.

If net metering, the main support mechanism for distributed solar PV power, has been a resounding success because of its simplicity, it is now criticised because of the problems of covering grid costs and the cross-subsidies it leads to. Although reforms are always difficult to implement, since they involve a conflict of increasingly organised interests, consensus is beginning to emerge regarding the structure of retail sales tariffs. Nevertheless, calls for an assessment of distributed generation according to its actual value for the system are increasing, without any real convergence of views on the methodology to be adopted to date.

Conventional stakeholders are also looking to adapt in order to find growth opportunities where primarily only challenges appear. The diversification of activities is an important lever for transformation, even if the case of NRG Energy illustrates the difficulty in making strategic shifts while maintaining investors' confidence. Changes in the regulatory framework are also being considered, to allow for alignment between the utilities' financial interests and the objectives of the low-carbon transition.

More importantly, states such as New York, California, or even Minnesota are engaging in discussion on the optimisation of centralised and distributed resources. The industrial structure in place influences the approaches adopted locally, particularly with regard to the demarcation between the regulated sphere and activities subject to competition. However, what these initiatives have in common is that they seek to pre-empt and support the changes, via a reinforcement of the interface role of distribution grid operators, to eventually promote the emergence of new stable and competitive business models.

The US Electricity Industry and the Low-Carbon Transition
Download
0.89 Mo
Keywords
Electricity Energy United States
Print this article
Back to top