Donald Trump’s election to the White House appeared to be the beginning of a profound change in the United States’ immigration policy. He reneged on bipartisan consensus that recognized the “positive contribution” of immigration to the country. This resulted in an increase in policies that affected all aspects of immigration. However, it is the most symbolic of Donald Trump’s goals: building a wall between the United States and Mexico that caused the longest government shutdown in American history. 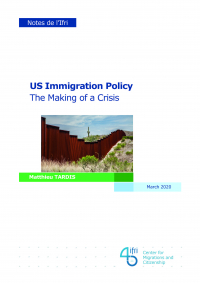 Although, Donald Trump has made immigration a key criterion of his political agenda, immigration debates have been an ongoing part of American political life for several decades. Two topics have dominated these debates since the 1980s. The first concerns enhanced border enforcement, primarily at the Mexican border, and the second relates to the legalization of unauthorized immigrants in the United States. Since the IRCA (Immigration Reform and Control Act) was passed in 1986 during Ronald Reagan’s presidency, successive presidents have failed to find a compromise with Congress on an overall reform of the American immigration system. The focus has tended to be on the most coercive aspects of immigration policy, which even Barack Obama could not redress with a legalization program. More than a break with the past, Donald Trump’s policy is simultaneously the successor to and manifestation of institutional deadlocks stemming from the polarization of American political life.

Yet, from a quantitative point of view the immigration situation between the United States and Mexico is far from exceptional. It falls far short of what the United States experienced at the turn of the 2000s. On the other hand, the profiles of immigrants arriving at the border have changed greatly. Since the early 2010s, single Mexican men, who used to cross the border for work, have given way to families and unaccompanied minors from El Salvador, Honduras and Guatemala, seeking asylum in the United States. But the American asylum system has been neglected in favor of enhanced border enforcement and is unable to effectively and suitably respond to these people’s situation.

Despite this situation, the federal government has embarked on a frantic race to prevent immigrants crossing the southwestern border. Although, Donald Trump has not been able to start building the wall yet, he has put a legal and operational arsenal in place to drive immigrants even further from the United States. The right to asylum has gradually been dismantled by restricting the number of entries at border crossing points and by implementing an outsourcing policy to manage migration flows. American power has enabled Donald Trump to impose agreements on Mexico and the so-called “Northern Triangle” countries, forcing them to take responsibility for these asylum seekers, at the expense of an escalating humanitarian crisis. This policy has been able to proceed without any hindrance by Congress, highlighting the shortcomings in the US political system. But the government has to contend with other counter-powers, in terms of judges, cities, and civil society for whom immigration has become a symbol of opposition, or even resistance, to Donald Trump.

The Political Economy of the Metaverse
END_OF_DOCUMENT_TOKEN_TO_BE_REPLACED
Critical minerals: How to secure stable and resilient supply chains? Views from Europe...