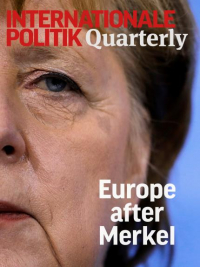 France has strong expectations of Germany, but these expectations can be paradoxical, even schizophrenic. On the one hand, there are historical French fears of a reborn Germany becoming too powerful or simply being “arrogant.” On the other, there are increasing expectations that Germany, often regarded as an over-cautious ally, will make more substantial commitments, especially on foreign, European, and defense policy. Paradoxically, within this context, Chancellor Angela Merkel’s modest policies seem to maintain the right balance, serving to reassure French fears.

For this reason, the upcoming German elections, set for September 26, remain a cause for concern in France. Underlying this concern is not only the prospect of Merkel’s own departure, but also the possibility of poor results for her bloc, the alliance of her center-right Christian Democratic Union with Bavaria’s Christian Social Union. In French political and diplomatic circles, there are fears prompted by the growing influence of the Green party, including the possible break-up of the current CDU-Social Democrat federal coalition, or worse, a new majority without any Christian Democrat participation. Of scenarios in which the Christian Democrats are not in government, the worst from a French point of view would be a coalition of the Greens, the Social Democrats, and the radical Left Party. This outcome—known as a “red-red-green” coalition—could call into question all the projects launched during the Merkel era, even the less ambitious ones.

Given the current weakness of the CDU, the end of the Merkel era has become a clear matter for concern in Paris. Specifically, these concerns focus on how cooperation with Germany will develop if the new government has no Christian Democrat participation, let alone with an unprecedented Green-led coalition.

Paul Maurice is a Research Fellow at the Study Committee on Franco-German Relations (Cerfa) at the Ifri.

Building Bridges over the Blue Pacific. Beyond Marine...
END_OF_DOCUMENT_TOKEN_TO_BE_REPLACED
Asia after the War in Ukraine: Re-imagining multilateralism and the risk of...