This report explores business models for storage solutions that may help the European energy system adapt to new challenges. 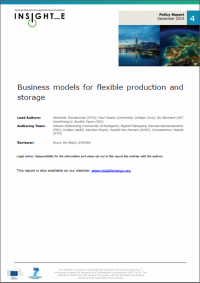 Current trends and policies are progressing in the direction of an increased share of electricity from renewable sources in the EU electricity system, in particular from intermittent sources such as wind and photovoltaics. Furthermore, the share of electricity in total energy consumption is likely to increase in the coming years. Finally, there is increasing use of electric appliances in households at varying use through the day. All together this results in potentially large and sometimes fast variation of both electricity production and consumption - as well as the need to match these - calling for temporary production or storage of electricity or conversion of electricity into other forms in a range of scales for both power and time.

In the light of past and current experiences, the study reviews the need for temporary production and storage (amount of energy, power needed, time scales) in the future, at a time horizon out to 2030 and 2050. This aspect of the report bases its analysis on modelling exercises, and considers the potential solutions to deploying temporary production and storage. Business models and potential evolutions of the legislative framework associated with the different solutions are also proposed.
As highlighted in the past and present analysis of this study, EU energy policy is mostly based on characteristics of existing generation assets (fossil fuel, nuclear and hydro), their ramping dynamics and start-up costs. So far, flexibility has been provided from the generation supply side, and not demand side. It has been agreed by national regulators that the electricity grid supporting system flexibility should be designed up to the highest demand (peak demand) on the grid. However, the Energy Efficiency Directive leaves room for interpretation, where storage is envisaged as a demand tool.

Key learnings from the modelling study:
 The modelling study report verifies findings from other studies that multiple benefits are required to justify battery storage.
 There is a clear correlation between the degree of RES penetration and the value of storage. This is illustrated by the difference in feasibility of storage between the reference scenario and the CO2 scenario.
 Under current estimations of battery prices, there is no business case for battery storage up to 2030. Storage becomes attractive in selected markets in 2050.
 There are large variations between the countries which were investigated: Austria, France, Germany and Italy. The main reason is the significant difference in production mix and infrastructure.

Further studies including how multiple benefits can be used to justify large-scale battery storage may be considered. However, it is likely that such studies would reveal even larger national differences.
Main findings of the report: The outlook for storage
 Ensuring a level playing field to competition. Flexibility depends on the liquidity of the market and would require a certain level of competition between the main players i.e. arbitrage between day-ahead and intraday markets, between peak and base load prices.
 Storage facilities should be generally understood as a semi-regulated activity, with the primary goals to serve the purpose of ensuring flexibility in the system while securing security of supply. Given the “semi-regulated” nature of storage, storage facilities should be owned by a separate body, a ‘storage system operator’, in line with the unbundling rules of the Third Package1.
 Extensive research needs to be done on finalizing and establishing the needs and obligations of storage facilities in order to fulfill the foreseen role of storage facilities in a European electricity market, as well as securing communication between the ‘storage system operators’ and the grid system operators, the TSOs and DSOs.

Building Bridges over the Blue Pacific. Beyond Marine...
END_OF_DOCUMENT_TOKEN_TO_BE_REPLACED
Asia after the War in Ukraine: Re-imagining multilateralism and the risk of...