Tackling inequalities and vulnerabilities: Why and how G7 development policies could do better A Think Tank 7 Contribution

The G7 has made the fight against inequality a crosscutting issue for the Biarritz Summit. The Development Ministerial will address issues of vulnerability, especially the Sahel Alliance. This focus on inequalities and vulnerabilities is nonetheless inseparable from a general discussion on financing sustainable development. 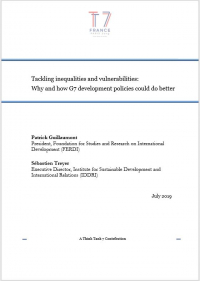 The international development agenda relies today on a very legitimate political basis, agreed on in 2015: Agenda 2030 and its Sustainable Development Goals, and the Addis Ababa Action Agenda on financing sustainable development. But even though this basis is politically sound, we are facing two major issues, requiring urgent action:

The world is going through an unprecedented transition, and developing countries are at a crossroads. Investing in an inclusive, resilient, and sustainable economic transformation pathway is necessary for the sustainability of these countries’ own development but is also a contribution to global public goods.

China has presented how it sees development and international cooperation through its Belt and Road Initiative and places this initiative under the overall objectives adopted by all countries in 2015: The Paris Agreement, and the 2030 Agenda with its sustainable development goals (SDGs). The Belt and Road Initiative’s Chinese proposal is a pragmatic interpretation of these agendas, and could essentially be considered as an investment program in infrastructure, aiming at intensifying trade exchanges. It is also presented as exempt from political conditionalities.

Faced with this proposal from China, there is a lack of a clear ambition on the part of G7 Members. Even if we know that public official development assistance (ODA) will not be enough by itself, the G7 members are the biggest contributors to ODA and the largest shareholders of multilateral and bilateral development banks. The replenishment of many of the corresponding funds in the coming months is a very important window of opportunity for G7 country to show their leadership and shared ambition.

There is thus a need for G7 Members to put more emphasis on their common ambition: supporting the implementation of Agenda 2030 by the countries themselves through their own definition of their economic transformation pathway, which takes into account all the dimensions of sustainability as well as of their vulnerabilities (economic, climatic and environmental, social). This shared ambition also entails putting the issues of governance and the promotion of democracy at the heart of the agenda, as a critical building block for reducing vulnerabilities.

On the same topic
G7 / Sommet Think Tank 7
Tackling inequalities and vulnerabilities: Why and how G7 development policies could do better
Download
0.85 Mo
Keywords
Development G7 Social inequalities Africa Europe
Print this article
Back to top

The Political Economy of the Metaverse
END_OF_DOCUMENT_TOKEN_TO_BE_REPLACED
Critical minerals: How to secure stable and resilient supply chains? Views from Europe...