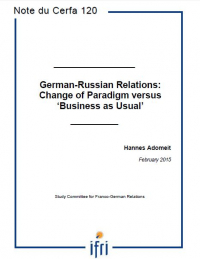 In 2014, Germany’s relations with Russia markedly deteriorated. The decline was precipitous but it did not occur suddenly. It began some time before Moscow’s annexation of Crimea in March 2014 and the Kremlin’s support for separatism and thinly concealed military intervention in eastern Ukraine. In the period from the collapse of the Soviet Union in 1992 through Gerhard Schröder’s chancellorship (1998–2005), Germany was Russia’s privileged partner in Europe. In that sense, Berlin had a ‘special relationship’ with Moscow, officially labelled ‘strategic partnership’. Such patterns of the past raise the question whether the current crisis in German-Russian relations is merely a temporary phenomenon, a downturn that will again be replaced almost literally by ‘business as usual’, or if the present deterioration of relations is to be regarded as a change of paradigm that encompasses all dimensions of policy and is likely to persist for the foreseeable future?

This Note du Cerfa attempts to answer this question. In doing so, it will first focus on changes of perception and paradigm on six different levels, that are decisive for the formulation of Germany’s policy vis-à-vis Russia. These include: (1) the effects of Putin’s new domestic and foreign course; (2) the position of the German Green party on the government’s Russia policy; (3) shifts in SPD perceptions of Russia; (4) the consensus of the CDU/CSU-SPD coalition government vis-à-vis Russia; (5) the importance of Russia for German industry and commerce and Germany’s dependency on Russian gas; (6) the public opinion vis-à-vis Russia.

Second, the analysis will look at the conclusions drawn by the German government for the conduct of policy. In this regard it is noteworthy that the policies of the current German government vis-à-vis Russia have, from the very beginning of the coalition’s formation on 17 December 2013, been remarkably firm and consistent. This is quite contrary to previous crises when, as after the Georgian war in August 2008, Berlin quickly returned to ‘business as usual’ in its relations with Moscow. To some extent, the central role that Germany has played in the management of relations with Russia in the crisis over Ukraine can be said to give substance to statements made by President Joachim Gauck, Steinmeier and Defence Minister Ursula von der Leyen at the 50th Munich Security Conference in 2014 that Germany should be more active and should assume greater responsibility in international affairs.  There are, however, limits to the deviation from previous patterns of policy, which concern in particular the security and defence dimensions of the crisis.

Consequently, if one posits partnership and cooperation, as well as the ‘Russia first’ approach, to have been the constituent elements of the German paradigm for the relationship, then the paradigm has changed. The new paradigm is that of the management of conflict.

Until 2013, Hannes Adomeit was Professor at the Natolin (Warsaw) campus of the College of Europe, teaching courses on the EU and Russia.