Skip to main content
You are here
Home > media > Press releases > Ifri, the only French institution ranked among the 20 most influential think tanks in the world
media Press releases

Ifri, the only French institution ranked among the 20 most influential think tanks in the world

According to the new 2014 Global Go To Think Tanks Report conducted by the University of Pennsylvania, Ifri ranks 20 within the 100 most influential think tanks in the world. 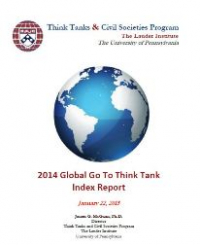 According to the Global Go To Think Tank Report 2014 conducted by the University of Pennsylvania and published in January 2015, Ifri is the only French institute, from 6.618 catalogued, to be ranked the 20th among the 100 most influential  think tanks in the world.

Present in most of the category divisions of the report - and especially for the innovative nature of its research studies - Ifri confirms its international position, ranked also 4th think tank in Western Europe from 80 selected organizations, far ahead of other French institutes catalogued

Launched at the United Nations University in New York on January 2015, the University of Pennsylvania study selected the finalist institutions from more than 6 618 think tanks in 182 countries. The Global Think Tank Index was developed with the contribution of 3 500 experts, academics, observers, policymakers, journalists, government and NGO representatives of 120 countries.

Captain in the Storm: Challenges and opportunities for the...