The “new scramble for the Pacific” is characterized by a race for the control of maritime space and resources, oscillating between ocean grabbing and ocean commoning. 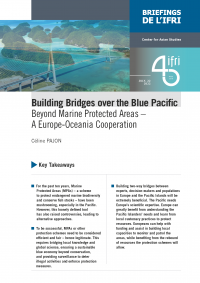 This tendency can be seen in the endemic nature of Illegal Unreported and Unregulated (IUU) fishing (estimated in 2016 as 10% of the overall catch in the Pacific Islands Countries – PICs), but also in the multiplication of large Marine Protected Areas (MPAs): delimited areas in which certain human activities such as fishing are restricted to conserve resources (the Pacific hosts the majority of the world’s MPAs).

The European Union (EU), as the biggest importer of fish (which imports half of its tuna from the Pacific) and a leader in biodiversity protection, has a key stake in ensuring a sustainable management of these resources. Moreover, Europe has territories in the Pacific (French New Caledonia, French Polynesia and Wallis & Futuna) with large Exclusive Economic Zones (EEZ) that are difficult to monitor and protect in the face of diverse challenges: foreign intrusions, IUU fishing, narcotrafficking and interstate tensions. Hence, ocean governance is one of the seven priority areas of the EU’s Indo-Pacific Strategy.

MPAs have been the favorite scheme to manage the maritime space and protect biodiversity & marine resources. Large or small, they can offer minimal or total protection by limiting certain human practices. A loosely defined framework, MPAs allow for a greater control over a designated territory. As such, it is a truly geopolitical object, and is not immune to controversy. This said, MPAs are a key tool for biodiversity conservation, and a vital scheme to achieve the United Nations Convention on Biological Diversity’s call to protect at least 30% of the planet – land and sea – by 2030 (the 30x30 initiative).

To be useful and successful, MPAs or other protection schemes need to be considered efficient and fair – hence legitimate. This requires adequate access to scientific data to ensure the process is knowledge-driven and to gauge the effectiveness of the protection measures. Local communities, their economic needs and their traditional knowledge of the ocean, should be taken into account at each stage. Moreover, surveillance should be ensured to deter illegal activities and enforce protection measures.

This briefing argues that building two-way bridges between experts, decision-makers and populations in Europe and the Pacific Islands will be extremely beneficial to ensure the effectiveness and fairness of ocean governance schemes. The Pacific needs scientific data that Europe can offer. Europe can greatly benefit from understanding the Pacific Islanders’ needs and learn from local customary practices to protect resources in a more relevant and democratic manner. This participatory, multi-scaled approach would provide new paths towards more efficient resource protection schemes in Europe, too, taking into consideration tools that may not have conservation as an objective, but are effectively sustaining biodiversity.

This briefing is based on discussions that took place during the webinar “Are Marine Protected Areas a relevant tool for the Pacific?” organized by Ifri’s Pacific Islands Program on June 21, 2022. Contributions from panelists will therefore be highlighted.

This Briefing is supported by the Pacific Community (SPC):

Neither surveillance nor algorithmic consumerism. Towards...
END_OF_DOCUMENT_TOKEN_TO_BE_REPLACED
Citizen Mobilization: A Solution for Refugee Integration in Europe?