Our world is becoming increasingly contested and unpredictable and we are trending towards a return of great power strategic competition, characterized by more frequent challenges to the established rules-based international order. As a consequence, the risk of interstate conflict continues to rise. This regressive evolution is most readily apparent in the maritime domain, where the concomitant impacts on the free flow of international trade and the control of illegal and unregulated fishing are interlaced with the prescient, yet growing challenge of environmental security. 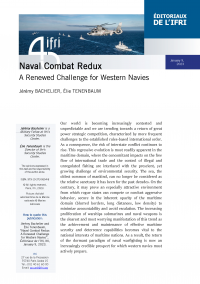 The sea, the oldest common of mankind, can no longer be considered as the relative sanctuary it has been for the past decades. On the contrary, it may prove an especially attractive environment from which rogue states can compete or conduct aggressive behavior, secure in the inherent opacity of the maritime domain (blurred borders, long distances, low density) to minimize accountability and avoid escalation. The increasing proliferation of warships submarines and naval weapons is the clearest and most worrying manifestation of this trend as the achievement and maintenance of effective maritime security and deterrence capabilities becomes vital to the national interests of maritime nations. As a result, the return of the dormant paradigm of naval warfighting is now an increasingly credible prospect for which western navies must actively prepare.

A new strategic competition playing out at sea

The war in Ukraine has confirmed the perception that a change is underway in the way non-Western powers apply sea power as a warfighting instrument. Russian naval blockades of Ukrainian ports, Kalibr missiles strikes, the capture and subsequent recapture of Snake Island from the sea, and perhaps most obviously the sinking of the Moskva, all point to the growing contest at sea which strategists must no longer consider as a staging area for air or land operations. Other deliberate tactical encounters below the realm of open conflict suggest that naval combat operations can be more appealing than other forms of naked aggression in the eyes of revisionist powers. The increased propensity for uninhibited aggression at sea has been underlined by naval “incidents” such as the Cheonan sinking by Korean People’s Army Naval Force in 2010, the Iranian attacks in the Gulf in 2019, and even some tense encounters in the Mediterranean. Not unlike cyber (and exo-atmospheric) space, these have become a domain well-suited to provoking and testing an opponent’s reaction through exploration of the grey zone.

Massive rearmament on a global scale port ends the return to a naval hard power strategy, as nations strive to gain a capability edge over competitors. Between 2008 and 2030, many navies will make a dramatic leap in terms of tonnage and capabilities, particularly in the Indo-Pacific and Mediterranean Sea.[i]The increase in pure tonnage has also been accompanied by a new level of exceptional qualitative development, as in the People’s Liberation Army Navy, which alone represents a formidable challenge to the west. For its part, the Russian Federation Navy is likely to emerge relatively unscathed from the current war in Ukraine – especially with regard to its submarine fleet – which may shoulder a greater strategic role in the future.

In the maritime domain so increasingly defined by multifaceted competition, it is imperative that western navies must sustain the immutable mission to protect our Sea Lines of Communications and Exclusive Economic Zones, including the seabed, from adversarial encroachment. The United Nations Convention on the Law of the Sea celebrated its 40th anniversary in 2022, however, the rules-based international order it purports seems increasingly under threat and more fragile at sea than it is on land. Extensive sovereignty and territorial claims over both international and territorial waters by revisionist powers are threatening freedom of navigation in various parts of the globe, but nowhere is the impact more acutely felt than in the Western Pacific. Such challenges can be overt or covert (the latter often through incremental “grey zone” tactics, which seek to impose change through “fait accompli”) thus shifting the blame onto the defender.

Technological evolution by leaps and bounds

In something of a contrast to the vast increases of warship tonnage seen elsewhere to secure a relative fleet advantage, western navies have favored investment in maintaining their technological edge. Such a quality for quantity trade-off, however, does not always outweigh the comparative loss in sheer numbers. This is particularly evident in the field of munitions: the looming salvo competition does not bode well for those navies equipped with precious few million-dollar missiles and a dwindling kinetic strike capacity, indeed self-protection systems retain the higher priority for capability planners designing expensive new naval platforms. The ominous imbalance of offensive firepower in our new era of strategic competition therefore demands that we inculcate a culture of adaptive, disruptive, and out-of-the-box thinking amongst our future operators and future commanders tasked with the responsibility to fight and win at sea.

One must first acknowledge that there will be no silver bullet to counter massive enemy fleets. Accordingly, we should do all that we can to increase shipbuilding efforts. The US Navy leads the way with its “Navigation Plan 2022” now aiming at a fleet of 373 manned ships – 75 more than today. The Royal Navy has stated its goal of reaching 24 frigates by 2030, an increase of one third from its current base. In France, the boost given by the 2019-2025 military programming law has put an end to three decades of equipment and capability cuts by laying the groundwork for future capabilities.

Western navies must not lose sight of their valid belief that technological superiority is key, especially in the early stages of a high-intensity conflict. Innovation must be encouraged, nurtured, and funded as part of deliberate capability research and development programs. Innovations expected to mature soon include the ongoing rapid development of varying sizes of uncrewed systems at sea, in the air, on the surface, and undersea. We can and should regard uncrewed systems as game changers. The ability to seamlessly combine humans and machines in naval combat maneuver will become a prerequisite for success in an ever more lethal future battlespace, envisaged to be characterized by long range anti-access systems and acute electronic warfare. In the logical extrapolation of this trend, western navies will also need to be pioneers in the effective systems integration of artificial intelligence, quantum technologies, or directed energy weapons.

In the competitive and degraded future maritime environment, the qualities of endurance and resilience will be fundamental. This is especially true of space and cyber, both crucial for Intelligence Surveillance and Reconnaissance as well as Command, Control, and Communications functions. Additionally, given the anticipated exponential growth in systems complexity, navies must place a far greater emphasis on ensuring resilience in supply chains and maintenance processes, which in turn will become a much higher priority for adversary targeting efforts. It is only when these upstream enabling and support missions are mastered, that fully assured naval combat potential can be unleashed.

The optimal use and allocation of weapons systems technology are of course only as good as the operator. The human factor remains the most essential and strategic component of a navy that aspires to fight and win at sea. The dynamic evolution of social norms and networks together with changing societal demographics are serious challenges to the maintenance of sustainable manpower levels and navies must devise novel and open-minded approaches to recruit, sustain, and manage the future workforce. Command and doctrine must be adapted from the comfort of tradition to our new realities in order to carefully manage individual expectations. Sailors will have to train harder and smarter than ever before and curricula will need regular review for relevance and currency. To keep pace and evolve, navies must routinely challenge entrenched mindsets. For example, many decades of asymmetric warfare against terrorist and guerrilla threats have lost the habit of striking the first blow and an acute sensitivity to proportionality. This paradigm will fail in the face of peer or near-peer competitor equipped with agile and lethal capability.

The French Navy organized Exercise POLARIS in November 2021, which brought together 6 countries, 24 ships, 65 planes, and 6,000 soldiers, including 4,000 sailors from 6 nations for 16 days. This major exercise emphasized a renewed approach to operational preparation, stimulating tactical thinking in the context of high-intensity combat and getting closer to the reality of naval combat in a degraded/contested environment. In 2023, a major, joint exercise, called “Hemex-Orion”, will similarly allow the military to work together in contexts that are getting ever closer to the reality of high-level combat intensity. Navies are increasingly engaging in more realistic, complex, and integrated exercises, which are also multi-domain and multi-environment. They are an active reflection of our contemporary adjustment to the use of naval power in our envisaged future strategic circumstance.

The geopolitical risk of high-intensity confrontation at sea will reshape the world of naval warfare in the years to come. For success in future conflict, western navies must explore the art of the possible, challenge paradigms, invent and develop new modes of action, optimize technology, manage tomorrow’s workforce and master systems resilience.

It is in this perspective that the Chief of Staff of the French Navy, Admiral Pierre Vandier, and Ifri are organizing the first “Conférence navale de Paris” on January 18, 2023.

Naval Combat Redux: A Renewed Challenge for Western Navies
END_OF_DOCUMENT_TOKEN_TO_BE_REPLACED
Is the UN Security Council still relevant? France and Japan's views on the future of...