A saying claims that trade has no religion; it even adapts to a war situation, as demonstrated by the real-time reorganisation of trade channels at the Turkish-Syrian border. 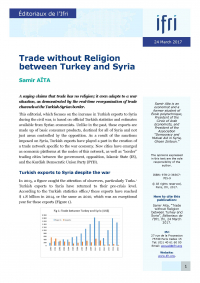 Trade Without Religion Between Turkey and Syria Download
0.65 Mo

This editorial, which focuses on the increase in Turkish exports to Syria during the civil war, is based on official Turkish statistics and estimates available from Syrian economists. Unlike in the past, these exports are made up of basic consumer products, destined for all of Syria and not just areas controlled by the opposition. As a result of the sanctions imposed on Syria, Turkish exports have played a part in the creation of a trade network specific to the war economy. New cities have emerged as economic platforms at the nodes of this network, as well as “border” trading cities between the government, opposition, Islamic State (IS), and the Kurdish Democratic Union Party (PYD).

Turkish exports to Syria despite the war.

In 2015, a figure caught the attention of observers, particularly Turks. Turkish exports to Syria have returned to their pre-crisis level. According to the Turkish statistics office, these exports have reached $ 1.8 billion in 2014, or the same as 2010, which was an exceptional year for these exports (Figure 1).

This level of Turkish exports is all the more surprising as they experienced a dramatic – and understandable – fall in 2012, the year the popular uprising turned into open war and the year of the conquest of Aleppo and its surrounding area by the Syrian warring factions supported by Turkey. In contrast, 2014 was marked by intense fighting between the rebel groups, in particular with the capture of the city of Raqqa by Islamic State (IS) and the establishment of the caliphate.

The surprise is even greater when you consider that this level of exports corresponded to a major share of total Syrian imports, which collapsed with the sanctions and the overall poverty of the population. Turkish exports went from 9 % of total Syrian imports in 2010, to 15 % in 2014, and then to 20 % in 2015. On the other hand, the - official - trade levels with Lebanon and Jordan have remained very modest in comparison, and overall are decreasing (Figure 2).

Syrian investors are not the cause

However, the Commercial Register published by the Union of Chambers and Commodity Exchanges of Turkey (TOBB) shows that the creation of Syrian enterprises was insignificant before 2013. They have gradually grown to reach a maximum at the start of 2016, with Syrian investment partnerships representing more than 40 % of new enterprise creation with foreign capital in Turkey, and greatly exceeding by their numbers, the Iranian and German partnerships which preceded them and which have slowed down (Figure 3).

Data on the amounts of direct foreign investment (DFI) corresponding to enterprise creation have not been communicated by the Turkish statistics or relayed in the OECD (Organisation for Economic Co-operation and Development) or UNCTAD (United Nations Conference on Trade and Development) databases. However, the amounts involved are deemed to be very low. The largest part is made up of small businesses created by Syrians residing in Turkey to ensure economic revenue, or real estate companies enabling housing to be purchased, since Turkish law does not give access to property to foreigners.

What is true is that the role of the different Turkish regions in exports to Syria has changed considerably, favouring the regions bordering Syria. Before the war, the western and Istanbul regions had the largest share.

And gradually it is Gaziantep (‘Aintab), Hatay (Sandjak of Alexandretta), Adana and Mersin which have assumed the leading role (Figure 4). The share of these southern regions of Turkey has increased from 20 % to 60 % of total exports to Syria. Nevertheless, it should be noted that the more easterly regions, with a strong Kurdish presence, have played no role in exports to Syria, while they might have been expected to at least serve the areas controlled by the Syrian Democratic Forces, which are predominantly Kurdish and under pressure from IS. As these Turkish regions themselves are in revolt, no cross-border Kurdish trade has been able to develop, at least officially.

Therefore, the exports seem rather to be made up of Turkish products and not re-exports. The Turkish Ministry of Foreign Affairs’ website states that the exported products are made up of “vegetable oils, animal fats and their derivatives, products for household use, preparations of cereal, flour, starch or milk, iron and steel, salt, sulphur, earths and stones, plastering materials, lime and cement.”

The influence of this trade with Syria is nevertheless insignificant, even for Gaziantep, totalling approximately 5 % of all exports. So, the total exports do not reflect this increase. Additionally, imports for this same region are not impacted by the increase either, which refutes the possibility that exports to Syria are re-exports. Even for the slightly less active regions, like Hatay, Mersin or Şanlıurfa (Urfa), where trade with Syria is around 10 to 15 %, nothing could be observed in overall developments in regional exports and imports (Figure 5).

The detailed export statistics by product show three dominant items in 2014: drinks and manufactured food products ($ 487 million instead of $ 102 in 2011); manufactured products used by industry ($ 353 million instead of $ 758 in 2011), and products not classified by Broad Economic Categories (which did not exist in 2011, and which reached $ 343 million in 2014, and continued to the level of $ 140 million in 2015). Therefore, there is every reason to believe that after the destruction of factories in Aleppo, Turkey exported everyday consumer products that are no longer manufactured in Syria from its own factories.

The table below shows that:

-     Electricity and petroleum product exports accounted for a quarter of total exports in 2011. They practically disappeared after 2012, which makes the increase in exports even more remarkable.

-     The nature of the majority of exports switched from intermediate products for industry to basic consumer products, such as flour, meat, vegetable oils, animal fats and manufactured textiles.

-     Car, steel, and cement exports now have an important place.

-      A substantial part of the Turkish exports is under the (unclear) heading of “other manufactured products.”

Where do the products exported by Turkey go to?

Data from the Turkish International Transport Union reflects the growth in Turkish exports in 2014: 108 000 trucks transported products to Syria in the first 11 months of 2014 (330 per day) compared to only 55 000 in 2013. But the border post statistics do not show these movements. This is all the more surprising as this transport not only involves Turkish exports, but also Syrian imports from other countries. The customs at Öncüpınar (Bab Salameh to the north of Aleppo) and at Cilvegözü (Bab Al-Hawa in the west) only record minimum exports ($ 76 million in 2014 and $ 66 in 2015). On the contrary, the customs at Nusaybin (facing Qameshli, controlled by the PYD) record a share of $ 323 million, knowing that in the end these could be products destined for Iraq.

Iraq is the second most important destination for Turkish exports after Germany. The total reached $ 12 billion in 2013. More than 60 % of these exports are destined for the Kurdish regional government (KRG). However, as for Iran, exports to Iraq dropped by 10 % in 2014, and even more in 2015. The assumption of re-exporting to Iraq via Syria is all the more surprising.

Beyond the question of the export transit routes, a rumour has been circulating about the increase in Turkish exports to Syria: that a good part of these exports may in reality be destined for Iraq, so fuelling a small processing and re-export industry in the province of Aleppo. However, it seems surprising, given the difficulties related to transport due to the territorial conquests of IS in 2014, that these Turkish exports may have found a way through Syria, enabling the various warring factions (including the Al-Nusra Front and IS) to take their cut in transit.

Another assumption is more verifiable: you only need to visit the markets in Damascus, Tartus, and Latakia to see Turkish consumer products everywhere, as well as in Idlib or Aleppo. So, despite the severance of relations between Turkey and the Syrian regime, and the hosting of the opposition “Coalition” in Istanbul as the “only legitimate representative of the Syrian people”, Turkish exports have resumed to the “useful Syria.” But by what route?

A Syria still united by trade?

Field surveys have already shown the complex route of Syrian oil extracted by IS to all areas of the opposition, the PYD, and the regime. They have shown the importance of some rebel cities as platforms for refining and the oil business. This same complex pattern exists also for Turkish exports.

Hence, a recent survey shows that these Turkish exports are mainly channelled through Cilvegözü/Bab Al-Hawa. The town of Sarmada has become the platform for wholesale traders, just like Al-Atareb a bit further on. The consumer products are of low quality, but less expensive than their Syrian equivalents. Some Turkish industrial groups based in Gazientep have specialised in food products for the Syrian and Iraqi markets, such as Altunsa. But Mersin remains the main platform for Turkish exports, including building materials (Turkish cement and Chinese steel), which have just about maintained their prices faced with the collapse in the Syrian pound’s exchange rate. Of course, all these products flood the markets in the rebel areas, but also in those controlled by the government, PYD, or IS.

A huge commercial network has hence been established in a divided Syria at war, which is based on cities as commercial platforms as in former times. Because of the importance of the Turkish imports,

Sarmada is now called the “economic capital of Syria” by the Syrian opposition, or at least of the “liberated” Syria. Large businesses from Aleppo and northern Syria have set up branches there. This network connects the commercial platforms to key cities, located at the “boundaries” of spheres of influence, and which are maintained voluntarily by all parties outside of the combat zones. This is the case for Qal’at Al-Madiq between the “useful” and “liberated” Syrias, for A’zaz and Afrin controlled by the PYD, and for Abu Dali to the east of Hama, on the boundaries of IS controlled areas where petroleum products are traded. Trade flows in both directions. For example, gasoline comes from the regime's areas and fuel oil from IS and the PYD. Trade also takes place with Turkish products, as well as with local products (Syria wheat crop is still mainly purchased by the government), or those coming from Iraq (carpets, etc.) or from Lebanon. It is this network, which is structuring the war economy that which the fighting warlords share in, taking their cut in transit.

In this network, Turkish imports are equally involved as oil extraction to create sources of income for the various fighting groups of all sides, fuelling an endless war.

All this goes well beyond the rhetoric about economic collaboration between the regime and Daesh. In reality, everyone collaborates with everyone for essential needs. If indeed, trade does not have a religion, south-eastern Turkey has fully integrated into this vital trade network in the chaos of war. What now still needs to be addressed is how the Russian military intervention with the government and the US military support for the Kurds in Syria may change the platforms and nodes of the commercial network in Syria at war.