Up to Europe’s threshold in the middle of Sahara and Sahel region, a growing insecurity led beyond mere reconsideration of field practice to a whole change of paradigm for multilateral and bilateral aid institutions. 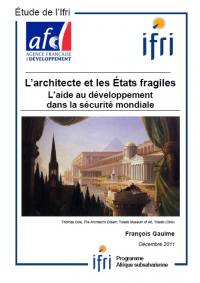 Since the end of the Cold War, the new narrative for an aid was mainly apolitical and centered on its efficiency in the fight against poverty. In the post-9/11 period, however, when burgeoning wars destroyed more than built a multiplied number of states, the lately adopted Millenium Development Goals (MDGs) sounded irrelevant to cope with the Fragile states" domestic problems and the more global challenges of terrorism and trans-national crime.

On this context, a priority for peace had to be put forward under a new framework, a move quite opposite to the former core aid strategies and resulting in a Copernican revolution for multilateral and bilateral institutions in charge of Official Development Assistance (ODA). Through its WDR 2011, the World Bank took a leading role for rethinking aid objectives in a security perspective with grand plans evocative of Thomas Cole’s famous painting ‘The Architect’s Dream". Such ambitious an endeavour goes also much beyond aid itself, involving the whole spectrum of ‘3 D" (Diplomacy, Defence, Development).

This note historically revisits ‘peace-building" and ‘state-building", the two complementary faces of the new aid paradigm. The former, initiated through the UN system, led to jointly creating the Peace-building Commission (PBC) and the Peace-Building Fund (PBF) during the Global Summit of 2005. State-building followed a rather different path. Despite its highly political nature, it was progressively elaborated by development agencies, generating a full bloom of various initiatives.

By switching from an evolving ‘peace-keeping" to ‘peace-building" in a curative as well as preventive way, the UN and the International community aimed at building a genuinely ‘sustainable" peace through civilian intervention and guard itself against a cyclical return of conflicts in fragile countries. Clearly distinct from ‘counter-insurgency" in its civilian origin and prospect, the ‘human security" concept supported a broadening of development assistance interventions into the security field, while the DAC/OECD ‘Principles for international engagement in fragile states and situations" completed in 2007 the previous Paris Declaration under the same line.

However, a huge gap remains today between theoretical achievements and field-practice. Agencies did not sufficiently comply with their own principles. ‘3 D" co-ordination was also far from perfect inside donor government systems despite occasional sprouts of new civilian-military organs specifically dedicated to jointly managing post-crisis/stabilisation such as the Bureau of Conflict and Stabilization Operations (CSO) inside the United States Government.

Five empirical lessons can be learnt from two decades of peace-building: do not confuse short term military action with long term development commitments; foster joint analytical work between the military and the civilians; take a better account of local history and culture; prioritise job creation in post-conflict environments; balance ‘peace benefits" with a civil-society-sensitive state-building on the longer term.

As to go further on state-building, aid institutions should move away from traditionally dealing with economics and social issues and better integrate politics into knowledge bases and action strategies, especially on the ‘legitimacy" and ‘elites" aspects. By doing so, these institutions might enlarge their views and free themselves from narrow ‘good governance" approaches and neo-liberal orthodoxy.

Among the most sensitive questions still pending on state-building, one might mention: How to integrate the security dimension into the state-building narrative? How to mitigate the international ‘weberian" normative model with the ‘hybrid regimes" aspects when political and religious powers emanating from tradition are still effective locally along with ‘modern" government systems? How to divert aid agencies sometimes unfamiliar with the OECD"s guidelines from keeping to home-brewed ‘provisional ethics" when dealing with naturally far-away state-building objectives?

Five main lessons can be learnt from exploratory state-building upon last years: relaying humanitarian relief with development programmes remains difficult; unevenly performing Multi-Donors Trust Funds (MDTFs) tend to be a favourite way for co-ordinated funding to fragile states ; investment on civil society and business in post-conflict reconstruction should be extended; an over-politicised global aid allocation results in a contrast between too many ‘aid orphan" and fewer ‘aid darlings"; prevention seems more efficient locally than nationally.

This note concludes with a caveat : On a new era of security-minded development assistance, if aid institutions cannot but acknowledge new policy principles and operational processes, they should stay modest in their ambition of transforming fragile states and societies and keep away from any ‘Architect’s Dream". They should also learn how to work better with the two other ‘3D" components in a tensed 21st Century’s world where building a sustainable peace becomes as important as building roads or schools and is of vital interest for Europe on the African continent.

This paper is published in French only – The Architect and Fragile States: Development Assistance's Contribution to Global Security

Strengthening Sovereignty in the Era of Global Value Chains
END_OF_DOCUMENT_TOKEN_TO_BE_REPLACED
The CPTPP and UK’s accession: What global implications?

The UK is the first State which formally applied to join the CPTPP. Its bid was accepted in...