China’s gas industry has been moving into a new era. China’s natural gas demand has skyrocketed amid a state campaign that encourages coal-to-gas switching. In just two years, China added 75 billion cubic meters (bcm) to global gas demand, the equivalent of the UK gas market, the second largest European market. Despite steadily rising, Chinese gas production has not been able to cope with such a huge increase in demand and gas imports have also surged. 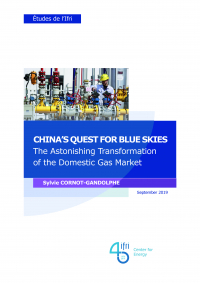 The boom in gas demand is policy driven. The fight against air pollution and the acceleration of coal-to-gas switching in the industrial and building sectors have been its key drivers. Climate change has not been a direct driver of the gas demand boom, but coal-to-gas switching has also helped to reduce China’s carbon intensity. Looking ahead, the growing recognition of the role of natural gas to tackle poor air quality and climate change provides the foundations for a bullish outlook for China’s gas demand. In its move to a clean, low-carbon, secure, and efficient modern energy system, the Chinese government has set a clear goal of making natural gas the third largest energy supply source after coal and oil, with a 10% share in the domestic energy mix by 2020 and 15% by 2030, against 7.8% in 2018.

China’s gas market has entered a new golden age that can propel gas demand to some 600 bcm by 2030, from 280 bcm in 2018. The nation will lead the growth in global gas demand and become the second-largest gas market already by 2025. The demand outlook is brilliant, provided domestic natural gas production steps up, alongside storage capacity and that import dependency remains at an acceptable level for policy makers.

Seasonality of Chinese gas demand is a major challenge. Despite rising production and surging imports, a major gas shortage affected northern China in winter 2017-18. This has exposed the key bottlenecks of the Chinese gas market: an underdeveloped gas transport and storage system and the lack of adequate incentives for investment in the gas industry. The gas crisis has not derailed the coal-to-gas switching policy but it has changed the pace and way of its implementation, with strict planning. The promotion of natural gas is changed from “coal-to-gas” to “change with gas”.

The gas shortage has been a catalyst for adopting short-term measures to alleviate winter gas supply/demand imbalances, accelerating the construction of key infrastructure and reinforcing and improving security of gas supply. Looking ahead, higher storage capacity and better interconnectivity of the transmission network will enhance winter security of supply and smooth out the seasonality of China’s LNG imports.

The gas shortage has also been a catalyst for intensifying gas market reforms to improve market competition and security of gas supply. The downstream market has been liberalized and full market competition has begun to emerge. Chinese policy makers have adopted new gas pricing for residential users to solve cross-subsidization between customers and better reflect procurement costs. Trading on exchanges is encouraged.

However, in the upstream and midstream segments, the degree of competition is still low. Growing gas demand has put more pressure to rapidly reform these segments. A fundamental step has been taken with the creation of the national pipeline company, an independent oil and gas transmission system operator. The move will facilitate utilisation of the transmission pipeline network by third parties, allowing more and more players to enter the market and fostering competition. As a result, it will facilitate the growth of gas supplies, unlocking the potential for new upstream suppliers and possibly have a downward pressure on prices, making natural gas more affordable to end users and further boosting gas demand in the long run. But there is still a long way to go before the system is fully liberalised. National oil companies’ strategic role in the gas supply chain is expected to remain dominant.

Building Bridges over the Blue Pacific. Beyond Marine...
END_OF_DOCUMENT_TOKEN_TO_BE_REPLACED
Asia after the War in Ukraine: Re-imagining multilateralism and the risk of...