Skip to main content
You are here
Home > Publications > Reports > Coal Exit or Coal Expansion? A Review of Coal Market Trends and Policies in 2017
Publications Reports

Coal Exit or Coal Expansion? A Review of Coal Market Trends and Policies in 2017 Etudes de l'Ifri, May 2018

Coal in the power sector is the principal focus of climate-related policies due to its high carbon intensity, making CO2 emissions from coal a leading contributor to climate change. 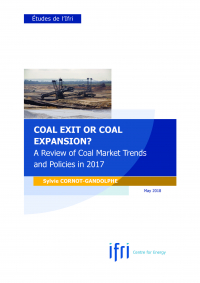 Coal Exit or Coal Expansion? A Review of Coal Market Trends and Policies in 2017 Download
2.44 Mo

While 38% of global power generation come from coal (in 2017), coal-related CO2 emissions represent more than 70% of power sector emissions. Coal-fired power plants are also the leading source of all primary air pollutants within the power sector, causing respiratory diseases and premature deaths.

Structural changes are fast sweeping through global electricity markets. A key driver is the fast deployment of renewable energy sources and their falling costs, making renewables increasingly competitive with coal. Coal is also becoming less competitive than other sources of electricity in several regions, due to the fall in gas prices, the rising cost of the carbon price and higher coal import prices. Pressures against investment in coal activities increasingly create challenges for financing coal projects. Global coal power investment has passed an all-time peak and has contracted over the past two years. Investment in greenfield coal mines is also at a standstill in all major coal exporting countries.

Nevertheless, while the future of coal is dark, 2017 has been a good year for the sector. World coal production increased after three consecutive years of decline. Global coal demand and international trade rose again, and high coal prices (above $80/tonne since summer 2016) boosted the financial results of coal-mining companies. As a result of growing fossil fuel demand, global energy-related CO2 emissions rose again in 2017. These short-term results do not call into question global decarbonization trends but demonstrate that current efforts are insufficient to meet the objectives of the Paris Agreement.

The world is still divided about the future role of coal. A major change came in 2015 with the Paris Agreement, which prompted many nations across the world to accelerate their efforts to reduce coal consumption. Since then, several governments and power utilities have decided to phase out coal from their electricity mixes and joined the “Powering Past Coal Alliance”. Coal reduction or phase-out policies are being adopted or considered by more and more countries, and the reduction in the share of coal power generation goes faster than expected in several coal-consuming countries.

But South and Southeast Asia remains a region for short to medium term growth in coal demand and Africa is a potential area for new growth. In this, new coal markets can also develop thanks to the support of countries eager to export their coal combustion technologies, led by China and Japan, and by the desire of coal exporters to find new outlets. Despite this growth, the sustainability of the relative good performance of the coal sector in 2017 is far from being ensured.

The German Health care System in the Face of the...
END_OF_DOCUMENT_TOKEN_TO_BE_REPLACED
Conversation on Technological Change and its Implications, with Audrey Tang, Digital...