The Global Climate Action Summit held in September 2018 in California has highlighted the importance of cities for promoting clean energy solutions and for combatting climate change. While energy policies in most countries depend primarily on national governments, cities have the possibility to develop and implement innovative solutions and ambitious policies. Chinese cities should be at the core of these developments, as they are confronted with many energy and climate challenges, often at an unprecedented scale: notably air quality, traffic congestion, energy security and massive consumption of building materials. For instance, outdoor air pollution in China has reportedly caused 1 million premature deaths in 2016, and in 2014 only 8 out of 74 Chinese cities would meet the national standards in terms of air quality. 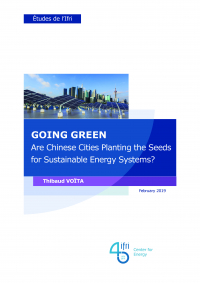 The challenges are daunting and China’s institutional framework may not generate incentives that would foster city-level innovations in the technology or policy fields. The Chinese political system is very centralized: the national leadership sets up objectives and plans that have to be implemented by local entities. However, there are plenty of national policies aiming at addressing energy challenges in cities: these include plans to fight pollution, energy and climate intensity objectives, technology plans to promote clean vehicles, or rating and labelling systems to promote building efficiency.

Some cities have taken advantage of the national policy frameworks and even set more ambitious targets and policies. Programmes and policies fostering sustainable cities in China are being developed at large scale, with several large cities surpassing centrally-planned policies and pioneering to become carbon neutral.

These developments will have major global implications: China’s cities are already pioneering at large scale the autonomous and low carbon mobility, giving Chinese companies a technological and economic edge. They will progressively and increasingly reduce growth in the country’s oil demand and imports. They will also fuel growth in natural gas demand and imports further as a large part of the country’s cities are still not heated by centralized district heating systems, which, if built, will be mainly running on gas. Overall, the period of super large building block construction is over, which will also reduce energy demand. Some of these initiatives are already considered as success stories and attract national and international attention: the electrification of Shenzhen’s bus fleet, Wuhan’s ambition to become a “hydrogen city”, Suzhou’s energy efficiency rating system or those who joined the Alliance of Pioneer Peaking Cities, and aim to reach their greenhouse gas emission peak ahead of China’s official target, set around 2030. These can be powerful drivers of large scale deployment of low carbon technologies in China and beyond.

However, the track record of municipal energy policies in China also includes some bitter disappointments. This is especially the case for the so-called green cities or low-carbon development zones developed over the past decades. Many of them have been abandoned, or have failed to achieve their energy and environment goals – this is for instance the case in the Hebei province for Caofeidian or for the city of Baoding.

Fundamental challenges that remain to be addressed, and issues to be closely watched, include: the evolution of district energy systems (both on the cooling and heating sides), the evolution of energy consumption standards for vehicles and appliances, the development of alternative energy vehicles (in particular electric and hydrogen). In addition, the digital innovations in Chinese smart cities do not only aim at greening these cities, but also at strengthening social control over inhabitants, which may ultimately limit the exportability of the Chinese concept.

All these elements may explain why the most promising city-level experiment is currently piloted by the central government itself. 100 kilometers (km) southwest of Beijing, the Xiongan zone is a massive project covering a zone three-time the size of New York and should only be completed by 2035. Unveiled in April 2017, the project has already attracted China’s best in class innovation and energy companies: Baidu, State Grid, or Sinopec. It aims at using artificial intelligence to develop smart energy systems and is branded by the central government as the “city of the future”.

Building Bridges over the Blue Pacific. Beyond Marine...
END_OF_DOCUMENT_TOKEN_TO_BE_REPLACED
Asia after the War in Ukraine: Re-imagining multilateralism and the risk of...