In just a few years, China has gained the status of an energy efficiency champion. 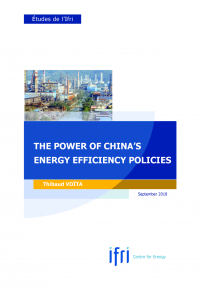 From 2010 to 2015, while China’s Gross domestic product (GDP) grew at a rate of 7.8%/year on average, the energy intensity fell by 18.2% (exceeding the national goal of a -16% reduction) and dropped from 0.617 to 0.505 Million tonnes of oil equivalent (Mtoe) per unit of GDP (at 2010 constant price). Such impressive results have led the International Energy Agency (IEA) to call China a “global efficiency heavyweight”.

Over the past decades, energy efficiency in China has gained unique political momentum and has become a central part of the local political landscape. Energy efficiency was first included in the five-year plans, in the mid-2000s. It was a first sign of China’s acceleration towards greener policies. In addition, energy efficiency has played a role in number of key Chinese economic policies: the market liberalisation and privatisations of the 1990s, the quest for energy security, economic development, the fight against climate change, and to a lesser extent the fight against pollution and the trade war with the United States (US). It is also an important element of China’s industrial policy, as industry consumes well over half of the 1,924 Mtoe of the country’s overall energy used, according to the IEA. This compares with an average of 20% in the rest of the world. Finally, energy efficiency has even managed to become a component of China’s development diplomacy, as Beijing exports its expertise to developing countries as part of its aid (even if the country may also be using large infrastructure projects abroad to export its production overcapacities).

Various factors can explain all these successes:

However, China still needs to do much more if it really wants to become a global leader in energy efficiency. Its energy intensity is well above the global average, and is far from reaching average level of European countries of the Organization for economic cooperation and development (OECD). The country needs to address important challenges, in terms of policy design (at the national level), implementation (at the local level), Monitoring, Reporting and Verification (MRV), and green finance. This is especially so after institutional reforms in 2018 that have left many questions unanswered.

Other potential threats to China’s national energy intensity relate to the evolution of economic growth. Although the country seemed recently to have managed to decouple its energy-consumption from economic growth, 2017 data show that China’s greenhouse gas (GHG) emissions were still growing that year, and even worse, are leading world emissions. Further resources need to be invested in energy efficiency in order to address these climate change issues, especially at a time when industry is still absorbing such an important share of China’s energy production. On the one hand, stronger economic growth may lead to new investments in inefficient infrastructure (e.g., buildings with poor insulation) and the further development of overcapacities. This could have a very negative impact on China’s national energy performance. On the other hand, a slowdown could lead local governments to support the same type of inefficient investments in order to boost growth, as was the case after the 2009 economic crisis.

But this is unlikely to prevent China from fostering its energy efficiency companies and promoting its expertise abroad, seeking to become a world leader in this field.