More than three years have already passed since China’s new silk roads were launched by President Xi Jinping. When he first mentioned the idea in an autumn 2013 speech in Kazakhstan, questions quickly emerged on the meaning of this general concept, which soon became widely promoted through a large-scale and well-coordinated public diplomacy strategy both in and outside China. 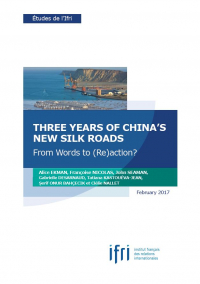 At the time it was hard to identify what was behind the concept and what it would ultimately amount to, given that official explanations and concrete projects remained scarce until early 2015. Now, more than three years on, what has been given many names – from the Silk Road Economic Belt and the 21st Century Maritime Silk Road, to One Belt, One Road to the Belt and Road Initiative (and what we will heretofore refer to as OBOR) – has finally begun to take shape. Projects have been identified, institutions created and money spent. And yet, OBOR still remains vague and unclear in many respects. Explaining what exactly it is continues to be a difficult task for both Chinese and foreign researchers, and this is likely to persist into the future.

One way to bypass such vagueness and grasp a clearer view of China’s projects and objectives is to examine how OBOR has been taking shape in concrete terms and which reactions this has triggered. Such an approach is proposed in the following chapters, in which a group of Ifri researchers analyze OBOR from their own areas of expertise. Alice Ekman begins with a look at the promotion and implementation process for OBOR, underlining that China’s project is evolving and expanding, both in terms of countries and sectors concerned, and that its flexible and adaptive nature is likely to remain. Françoise Nicolas examines the economic objectives of OBOR and the financial instruments used to push the project forward, highlighting that, more than anything, the concept is designed to serve the domestic economic interests of China. Delving into the energy sector, which has been identified as a key area for development within the OBOR framework, Gabrielle Desarnaud and John Seaman argue that the vast project is so far a continuation of China’s internationalization process in the energy field, but also provides a platform on which rules and norms could eventually be created and influence ultimately wielded.

Taking a geographical approach is another way to bypass the vagueness of OBOR. It serves to highlight the scope of the project, but also underlines its inherently geopolitical dimensions. Tatiana Kastouéva-Jean analyzes Russia’s mixed reception of OBOR, which comes at a time of deep antagonism towards Europe and the US, but also concern about what China’s rise will ultimately mean for Russia’s interests, particularly in Central Asia. Turkey is also an intriguing, if often overlooked case study. As Serif Onur Bahcecik explains, Turkey has long balanced between East and West, and OBOR provides Ankara with an opportunity to push its long-desired “Middle Corridor” through Central Asia at a moment when the leadership is ever more disillusioned with the European project. Finally, as OBOR reaches the shores of Africa, Clélie Nallet explores a variety of views as seen from the continent, explaining that while OBOR could extend China’s proactive history of investment into African infrastructure, local populations are also wary of its implications for their livelihood.

The report could hardly be an exhaustive analysis of such a diverse and evolving project, and is rather part of an ongoing body of research that seeks to examine OBOR within the context of China’s emergence as a regional and global power, and how this emergence will ultimately shape the international order. Indeed, OBOR has concrete economic and geostrategic implications and can no longer be considered only as a vague concept. Most of all, the 3-year timeframe shows that OBOR is becoming something quite different from what was initially conceived and anticipated. It has evolved to include a new set of countries and areas, and its flexible and adaptive nature is likely to lead to something even more different – and probably more comprehensive and ambitious – in the medium and long term, as China aligns the OBOR concept with most of its domestic and foreign policy priorities. Prospective analysis on the topic therefore requires similar flexibility and the ability to consider new developments in all directions.

Russian Perceptions of OBOR: From Threat to Opportunity
Tatiana Kastouéva-Jean

OBOR and Turkey’s Turn to The East
Şerif Onur Bahçecik

Africa on The Margins of OBOR?
Clélie Nallet
On the same topic
Europe and China's New Silk Roads
China in Asia: What is behind the new silk roads?
Keywords
New Silk Roads OBOR China Russia Turkey Africa
Print this article
Back to top

Mitigating Geopolitical Risk – Japan as a Stabilizer in...
END_OF_DOCUMENT_TOKEN_TO_BE_REPLACED
Has the European Union risen up to the challenges of geopolitics? Europe after the Czech...