Since the fall of the Derg regime in 1991, cordial relations have developed between China and Ethiopia, forming a positive political backdrop in front of which the two countries’ interests have increasingly converged. 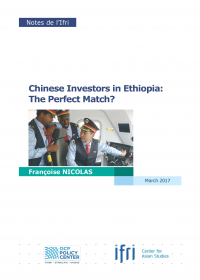 On the one hand, Ethiopia seeks to replicate the experience of East Asian countries such as Taiwan, Malaysia, or China and to attract foreign direct investment (FDI) in order to accelerate the development of its manufacturing capacities (in particular through an ambitious industrial Park – IP - development program and the acceptance of foreign-owned Special Economic Zones - SEZs). On the other hand, China looks to export its development model (including SEZs), to delocalize its most labor-intensive activities, and to promote connectivity between Asia and the African continent. In this context, the Chinese government identified SEZ projects in 19 countries – including one in Ethiopia (the so-called Eastern Industry Zone - EIZ), located in Dukem some 30 kilometers southeast of Addis Ababa.

Today, China is by far the leading foreign direct investor in the country. In addition to the Chinese-owned EIZ in Dukem, Chinese investors are also present in privately-run SEZs that are not part of the Chinese Ministry of Commerce (MOFCOM) strategy, as well as in government-led IPs and outside SEZs or IPs. Lastly Chinese firms are also extremely active in all kinds of infrastructure development thanks to Chinese funds.

Chinese investment in Ethiopia does not match the standard view of Chinese FDI in Africa, wherein investors are seen as looking for natural resources and plundering the country. Far to the contrary, as Chinese investments in Ethiopia are concentrated in infrastructure and in the manufacturing sector, they were expected to play a transformative role and give rise to a “win-win” outcome.

For the time being, however, the assessment is mixed at best. Although China has certainly played a useful role in Ethiopia by setting up industrial zones, financing infrastructure, and encouraging Chinese firms to move some manufacturing production to Africa, thus contributing to the industrialization process, its transformative power remains limited. Backward linkages (through the purchase of materials and services from the local economy) as well as forward linkages (which refer to a situation where foreign companies sell goods or services to domestic firms) are not easy to come by. In particular, local inputs are not always up to the standards expected by Chinese producers. Also, skills transfers that may simply occur through labor mobility so far remain limited, as the workers are concentrated in low-skilled jobs. For all these reasons, Chinese investment has not proven to be as transformative for Ethiopia as inbound investment was for China in the late 1980s.

In particular the hope of turning Ethiopia into an international shoe and light manufacturing hub remains elusive so far. Overall, Ethiopia’s export pattern remains dominated by agricultural products (coffee/tea, vegetables and live trees and cut flowers), while garments and footwear account for less than one percent of the country’s total exports.

Rather than manufacturing investments, Chinese investments in infrastructure may have proven to be more instrumental in transforming the country. The construction of new dams, for instance, has been instrumental in guaranteeing a stable supply of power and helping Ethiopia to realize its plan of becoming a major electricity exporter.

The explanation of this disappointing result in garments, footwear and other light manufacturing sectors lies with policies. The two-pronged approach to SEZs followed so far by the Ethiopian authorities, with government-led IPs coexisting with private foreign-led SEZs, is certainly a good approach since there are more FDI firms wanting to invest or expand in industrial zones in Ethiopia than the government can offer. However, it is important to make sure that the zones' activities are aligned with the country's needs in terms of industrial development. This is less likely to be the case if the state is not actively involved, as in the case of foreign-owned private SEZs.

However, various developments suggest that the situation may be changing soon. First, Ethiopia’s strategy has recently shifted in favor of government-led IPs, the logic of which is much closer to that of SEZs promoted in East Asia. Moreover, newly developed projects, such as the Huajian International Light Industry City, are also promising, as the sectoral orientation of the project is in line with the country’s industrial objectives. As these developments are still recent, the jury is still out on the reality of backward linkages and the ability of Ethiopian firms to take advantage of the presence of Chinese firms and technology, and hence on the potentially substantial benefits. The prospects look rather good, provided other accompanying measures are put in place so as to improve the overall business environment, and, probably more importantly, to enhance the local labor force’s “absorptive capacity”.