Since 2015 and the refugee crisis, the dialogue between the European Union (EU) and African countries on migration issues has assumed a new intensity. 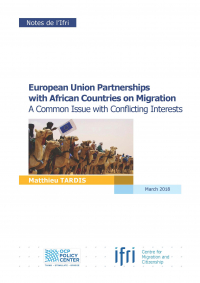 The EU, wishing to put an end to irregular arrivals in the central Mediterranean and increase the number of returning irregular migrants, proposed a new partnership framework with third countries in the wake of the March 2016 agreement with Turkey. This partnership framework is specifically aimed at African countries, as countries of origin and transit for migrants arriving in Europe. It gives a new scope to the external dimension of European asylum and immigration policy, whose effects have so far been very limited. This is now fully integrated into the EU’s and its Member States’ external relations. In other words, the migration issue is at the centre of European foreign policy.

The EU has a financial instrument to achieve its objectives, which has quickly become the most noticeable tool of the migration partnership policy. The Emergency Trust Fund for Africa (EUTF), introduced during the Valletta Summit in November 2015, has become the sign of a closer synergy, or even an alignment, between migration policy, security and development objectives. However, far from meeting the principles of partnership and shared responsibility, the EUTF, like the other dialogue frameworks, remains in the hands of the Europeans, who impose their objectives and control their implementation. The African countries find little leeway where they could be involved in setting the objectives and means of action.

The asymmetry of the partnership frameworks emphasises the contrast between the various partners’ challenges and expectations. Indeed, the European and African countries’ interests seem divergent or even conflicting, due to the two continents’ different social and political realities. On the one hand, the Europeans are seeking better co-operation from the African countries on the return of irregular migrants, border control and refugee protection. On the other hand, the African countries wish to develop legal migration channels to the EU, whether for their workforce or refugees.

Although the asymmetry of the partnership frameworks allows the EU to impose its objectives, however it must be careful to better consider the interests and challenges of its African partners at the risk of further destabilising this already fragile continent. Thus, intra-African regional dynamics have been put to the test by the problemisation and securitisation of the migration issue, whereas this has traditionally been seen as an economic opportunity by the people of Africa. The worsening situation of migrants and the people of the Agadez region in Niger is an example of the unanticipated effects of the European approach. The latter may jeopardize African countries’ efforts to establish freedom of movement in Africa which however has been a factor of prosperity and peace in Europe.

After Mali, what Commitment from Germany in the Sahel?
END_OF_DOCUMENT_TOKEN_TO_BE_REPLACED
Critical minerals: How to secure stable and resilient supply chains? Views from Europe...