The French Armenian Diaspora and Turkey: The possibility of dialogue? Note franco-turque, No. 5, January 2011

For several decades, French persons of Armenian origin have played a special role in Franco-Turkish relations. History explains this. Armenians originally came to France fleeing the massacres at the end of the Ottoman Empire, and for nearly a century they have integrated perfectly into the French social and political landscape, while keeping the memory of past traumas intact. Recognition of the 1915 genocide has been an explicit claim by the Armenian Diaspora scattered across the four corners of the world. In 2001, such recognition was voted by the French Parliament, and has thus become a subject of discord between France and Turkey. 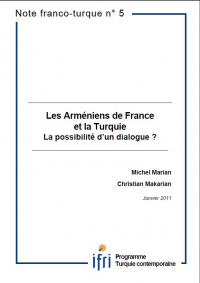 No dialogue can take place between the two States on this matter. Turkey has great difficulty in opening up the darker sides of its past, and accuses France of judging issues that are none of its concern. France, of its part, is quick to position itself as the defender of universal values, which it sometimes forgets concerning itself, while French Armenians always come forward at inopportune moments to recall the genealogy of their pain. This issue was for long taboo for the Turks, while nourishing violent militancy among Armenians - including the ASALA terrorist attacks in the 1980s. It continues to pollute Franco-Turkish political arrangements today. Both States are unable to lessen tensions on this subject, as they are caught between moral debate and realpolitik.

It may be asked whether civil societies are not better suited to clearing the ground of the common memory. The request for pardon put to Armenians by four Turkish intellectuals in 2008 struck a chord in France. It proved that the demands of the Armenian community are beginning to be heard in certain, private Turkish circles. The beginnings of a dialogue between individuals and societies have allowed the asymmetry surrounding this issue to be reduced and to bring the debate to an intimate level, which is probably an indispensable detour before the matter can be treated at diplomatic levels.

But it is precisely the diplomatic rapprochement between Turkey and Armenian, which also began in 2008, that is introducing new parameters into the debate. These parameters are intervening in the impossible mix of morality and realpolitik. If the Republic of Armenia accepts to negotiate protocols with Turkey, it may be asked what will happen to the Diaspora’s quest, which will be wrong-footed by the State it is specifically seeking to protect. It seems that a new balance of power, which is more explicit and yet more subtle, is emerging between the protagonists of the Turkey-Armenia-Diaspora triangle.

While this rapprochement is getting bogged down, the demand of recognition by the Diaspora is far from losing legitimacy. Instead, it is getting more complex, and moving beyond the insurmountable question of the genocide. It is henceforth being stimulated by a real curiosity for everything happening in Turkey. This has led to worries, given social and political developments, which are held to be unpredictable. But this curiosity reflects an undeniable desire for rediscovery, tinted with nostalgia.

The two following articles seek to help explain how Turkey’s image was constructed within the Armenian Diaspora in France, and how it has evolved. Two Armenian intellectuals go back over the origins of the present impasse, and explain why it is hard for them to talk with Turks and even more so with Turkey. But the tone of these articles suggests there is a desire to overcome fear and to envisage a change in relations, a change which is probably seen as inevitable. Inevitable, as time is running out for the descendants of the survivors of 1915, if they want to be heard before this drama finally recedes into History. Inevitable too, because the underlying situation in the Caucasus is changing, and this instability makes dialogue hard to start. Inevitable lastly, because civil societies have taken up the matter on both sides, and a Turkish-Armenian dialogue may break out of the private sphere and become a major democratic issue.