Donald Trump won the 2016 Republican primaries thanks to the mobilization of a specific part of the electorate: the white, non-college-educated, lower middle-class. 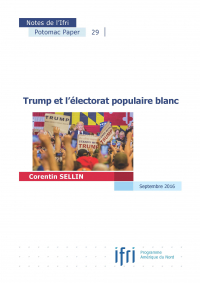 The de-industrialization process and the steadily declining influence of labor unions underway since the 1970s worsened with the 2007-2008 financial crisis. This evolution has led to the destruction of many unskilled industrial jobs and their replacement by low-paid service jobs. Many among the U.S. working class have either experienced firsthand the hardships of downward mobility, or are afraid that their children might take the same path.

The increase in single-parent families, rising mortality rates, and a crumbling belief in the American dream reveal the uneasiness that currently plagues the white, lower middle-class. Flooding the breach created by the Tea Party, Trump voters have embraced a racial narrative on their situation, blaming the immigrants they say participate in lowering wages and the minorities they see as welfare abusers.

In the meantime, the Republican Party has been too busy composing tax, economic, and migration policies that fit the interests of its rich donors to acknowledge the needs of its working class electorate. Trump’s campaign has successfully reached out to the white, lower middle-class by adopting two long-established populist discourses: on the one hand, a racist, anti-immigration line with a focus on identity; on the other hand, a stance on the economy that appears to call for less money in politics, stricter regulations on Wall Street and Big Business, and more social equality.

However, the white working class represents an ever-diminishing part of the U.S. population. Will it suffice to get Donald Trump into the White House? This would require a massive turnout of this segment of the electorate and continuing support of moderate Republicans, coupled with a low turnout of youth and minorities for the Democratic candidate.