This study addresses the consequences of US Liquefied Natural Gas (LNG) exports towards Europe, in particular on the strategy of Russia, the EU’s main gas supplier. 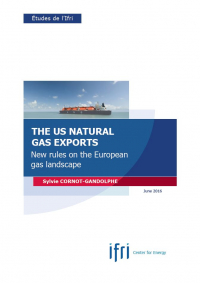 The shale gas revolution has profoundly changed the US gas scene and the competitiveness of gas on the US market. The abundant resources and sharp rise in production have resulted in surplus production and have driven the US gas prices down. The price spread between regional markets (United States, Europe, and Asia) has led US producers to look for new export opportunities. After a lively debate between advocates of exports, mainly gas producers, and their critics, mainly the major industrial users who were worried about a price increase, US LNG exports started in late February 2016 with the first cargo from the Sabine Pass (Cheniere) liquefaction plant exported to Brazil. Four other liquefaction plants are currently under construction. In 2020, the United States could become the third largest exporter in the world after Australia and Qatar.

The US LNG exports will revolutionise international trade in LNG. Their contract structure (linked to the US gas spot price, no destination clauses, and tolling agreements) and the projected volumes will enable greater flexibility in the international LNG market and facilitate price convergence between regional markets.

However, the US exports are starting in a market very different from that envisioned at the start of the 2010s when the export projects were launched. The drop in oil prices, the entry into production of new liquefaction capacities since 2014, and the slowdown in demand growth in Asia have driven LNG prices down on import markets. After four years of tight supply, the market is now in a surplus situation which should continue until the turn of the decade. These new conditions are profoundly changing the economics of US LNG export projects, which is questioned in the short term: the current prices are insufficient to cover the full cost of the projects. Existing projects are secured by long-term contracts for periods of 20 years. However, it will be difficult for new projects to obtain financing in the current conditions.

Due to the flexibility of US contracts, LNG cargoes will be exported to the most profitable markets. While the projects initially targeted the Asian market, the disappearance of the premium paid by Asian buyers and the slowdown in their demand make other import markets, including Europe, more attractive for US LNG exporters. At the current level of gas prices on the European market, which is particularly low, LNG is not however guaranteed to arrive in large quantities, as higher margins can be made in other markets (Latin America, the Middle East, and India). The European market is a "last resort" market for LNG surpluses which are likely to increase from 2018.

Traditional exporters to Europe, particularly Russia, are preparing for this new competition in a market where demand has fallen by a fifth since 2010, although it increased in 2015. The fall in Russian gas prices, which are correlated to fluctuations in the crude oil price with a six- to nine-month lag, removes on the short term the threat of this new competition. The increase in Gazprom’s exports to Europe (+8 % in 2015 and +18 % in the 1st quarter of 2016) is limiting additional LNG import requirements in Europe. LNG imports have decreased slightly in the 1st quarter of 2016 after their increase in 2015.

To read the full text, download the document below.