Migrations in Africa: Another Look Politique étrangère, No.1, Spring 2016

Migration in Africa is a major concern, but largely for Africans alone. To adequately study the question of international migration, one must look beyond Europe’s current predicament. Through its dossier on “Migrations in Africa: Another Look”, this issue of Politique étrangère examines a number of factors that determine migration movements, how states in Africa attempt to manage the significant problem of internal migration, the difficulties of integrating migrant workers into their host societies, and the false pretenses of Euro-African agreements on readmission. 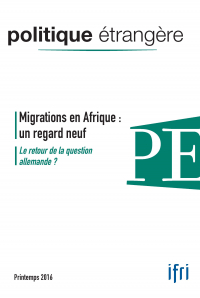 In a Europe confronted with multiple crises, are we witnessing, as is the subject of our Counterpoint section, “A Return of the German Question”? Certainly. It is not so much that Germany wishes it so, but is rather a result of the country’s own weight and influence, the occasional uncertainty regarding the choices it makes, and in particular the fundamental, existential doubts that Europeans have about themselves and the conditions of their entente. It is these doubts that ultimately bring German positions to the fore.

As the Middle East descends into tragedy, this copy of Politique étrangère provides a number of reflections:  on rivalries among jihadist groups, on the risk of contagion in countries that are still vaguely stable, on the relationships between various military forces on the ground, and on the internal logics that govern the Turkish actor – a decisive player in any hypothetical scenario.

Another underlying question that has been largely removed from debate in the West over the last twenty years, but that is now impressed upon us by current events: What are the Russian armed forces really worth?

FOCUS Migrations in Africa: Another Look

COUNTER ANALYSIS : A Return of the German Question?

From the German Question to the European Question, by Hans Stark

Living Together in Germany, by Stephan Martens

Islamic State vs. Al-Qaeda: Analysis of a Fratricidal Battle, by Dominique Thomas

Islamic State and Jihadist Clusters in Lebanon and Jordan, by Elisabeth Marteu

Kurds against IS: An Effective Military Solution? by Rémy Hémez

Brexit: The Risks of Referendum, by Vivien Pertusot

What are the Russian Armed Forces worth?, by Isabelle Facon

Turkey: Between Stability and Fragility, by Aurélien Denizeau

France's "pivot" Towards Asia: Too Little Too Late?, by Hadrienne Terres